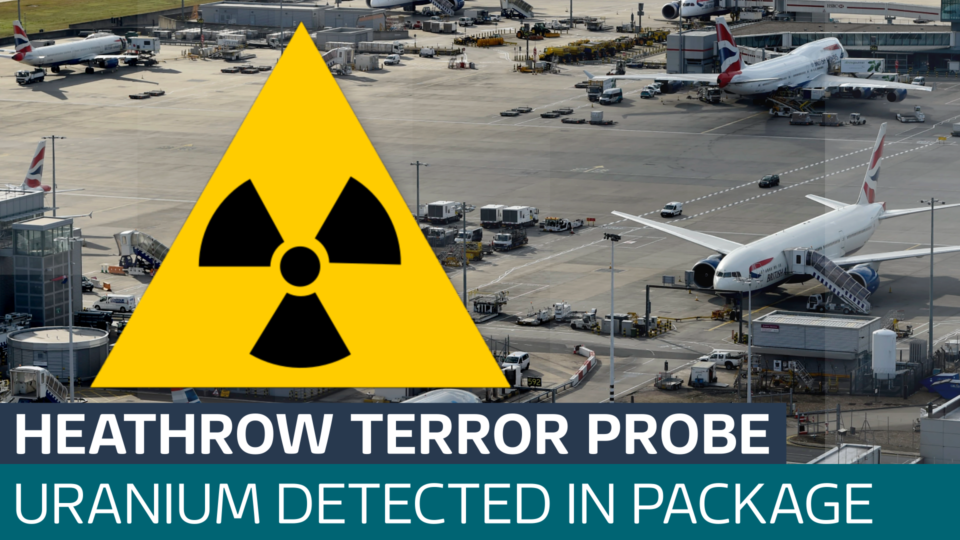 A very small amount of uranium was detected in a package that arrived in the UK at Heathrow Airport following a routine screening on 28,December 2022.It was found in a shipment of scrap metal, a source said.

The amount of radioactive material, detected by routine scanning was extremely small and had been assessed by experts as posing no risk, Richard Smith, head of London police’s Counter Terrorism Command said.

Colonel Hamish De Bretton-Gordon said the incident “should not worry the public”.

Alarms were triggered at Heathrow after specialist scanners detected the substance as it was ferried to a freight shed owned by handling firm Swissport, the Sun said.

The shipment’s intended destination is not clear. No-one has been arrested.

The Metropolitan Police said: “We can confirm officers from the Met’s Counter Terrorism Command were contacted by Border Force colleagues at Heathrow after a very small amount of contaminated material was identified after routine screening within a package incoming to the UK.”

What is Uranium applications

Uranium is an element which occurs naturally. It can have nuclear-related uses once it has been refined, or enriched. This is achieved by the use of centrifuges – machines which spin at supersonic speeds.Low-enriched uranium can be used to produce fuel for commercial nuclear power plants.

Highly enriched uranium has a purity of 20% or more and is used in research reactors. Weapons-grade uranium is 90% enriched or more.

Uranium can be used for civilian power generation and scientific purposes and is a key ingredient in nuclear weapons. Certain isotopes emit radiation that can be harmful to humans, and the metal itself is toxic if ingested or inhaled.