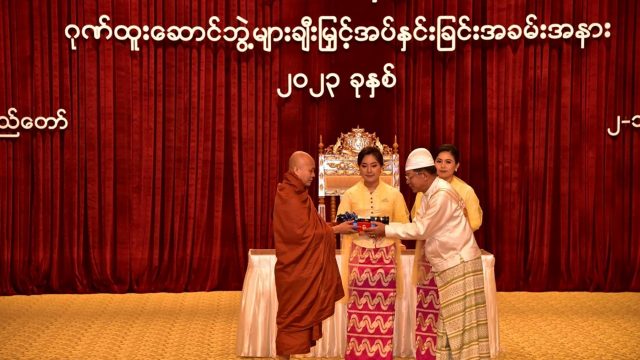 Wirathu a Burmese Buddhist monk is a firebrand monk dubbed as the “Buddhist bin Laden” for his role in stirring up religious hatred in Myanmar received a national award on Tuesday, with the Burmese military saluting his work in the country.

Wirathu — who received the moniker from Time Magazine in 2013 following deadly communal riots — was awarded the title of “Thiri Pyanchi” on Tuesday, the military’s information team said.

The award for “outstanding work for the good of the Union of Myanmar” was presented by military chief Min Aung Hlaing, it added.

Wirathu is one of hundreds of people receiving awards and honorary titles as the Myanmar Army prepares to mark the 75th anniversary of Myanmar’s independence from Britain on Wednesday.

Wirathu has long been known for his nationalist anti-Islamic rhetoric — particularly against the Rohingya Muslim minority.

In 2013, he appeared on the cover of Time Magazine as “The Face of Buddhist Terror”.

He had called for boycotts of Muslim-owned businesses and restrictions on marriages between Buddhists and Muslims.

Rights groups said these helped whip up animosity towards the community, laying the foundations for a military crackdown in 2017 that forced about 740,000 Rohingya to flee over the border to Bangladesh.

In September 2021, the junta announced it had released Wirathu after all charges against him had been dropped.

Aung San Suu Kyi(former head of government)77, has been detained since being ousted by the military coup almost two years ago.Last week, a military court handed down its verdicts in the final charges against the Nobel laureate, who now faces the possibility of spending the rest of her life behind bars with a total of 33 years in prison.