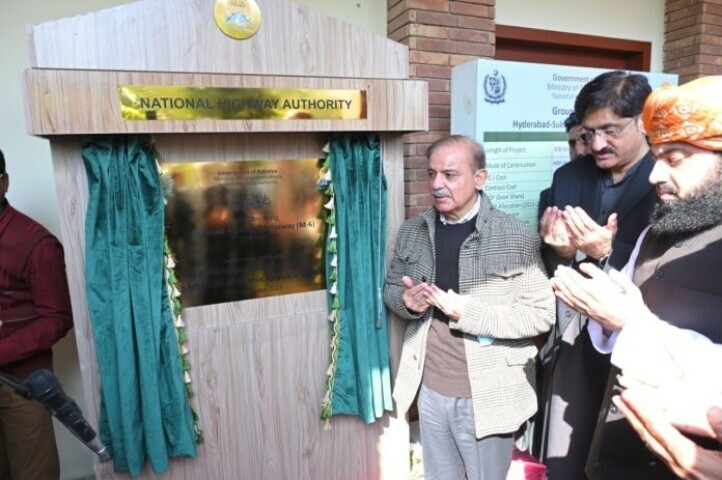 Prime Minister Shehbaz Sharif laid the foundation of the 306 kilometers (kms) long motorway route (M-6) between Sukkur and Hyderabad.Shehbaz Sharif said, “the development of road infrastructure connecting all provinces of the country, particularly the disadvantaged areas, was crucial for strengthening of the national economy”.

The 306-km-long M-6 will be completed with Rs 307 billion within 30 months as per international standards. The M-6 portion will complete the North-South Motorway Corridor, also known as the Karachi-Peshawar motorway, and will interconnect major cities of the country.

The prime minister lauded the role of Sindh Chief Minister Murad Ali Shah in the promotion of PPP (public-private partnership) model in the province, urging authorities to promote it in other provinces as well.

The prime minister credited Sindh’s public-private partnership model for the inauguration of the project, and hoped to replicate the same at a federal level.

“I believe that Planning Minister Ahsan Iqbal should [consider using] the public-private partnership model [for federal projects],” the prime minister said. “It is imperative for the federal government to follow this model. The province of Sindh has already been doing this.”

Chief Minister Sindh Syed Murad Ali Shah regretted that the apathy of the previous government delayed the construction of M-6 for over three years and emphasised that 25,000 jobs related to the project needed to be given to locals.

The six-lane motorway will comprise 15 interchanges, a large bridge over the Indus river, 82 bridges over canals, 19 underpass bridges, six flyovers, and 10 service areas. The project will create around 25,000 jobs.

The M-6 will pass through the districts of Jamshoro, Hyderabad, Matiari, Benazirabad, Nowshero Feroze, Khairpur, and Sukkur. Service areas and rest areas will be provided at every 50 km on both sides of the highway.

The project, whose estimated cost is Rs307 billion, was announced by the then prime minister Imran Khan in April 2021 as part of a “historic development package” for Sindh.