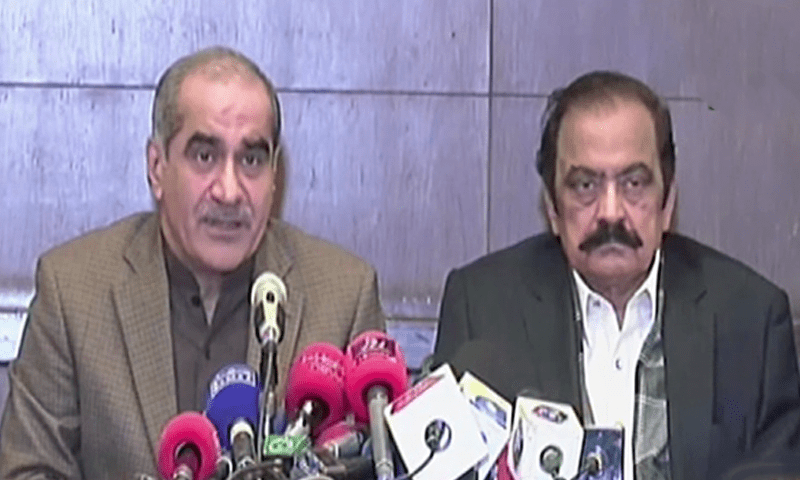 The statement comes a day after Imran invited the government to “sit down for talks” on the condition that it announces a date for early general elections, failing which he would dissolve the provincial assemblies of Punjab and Khyber Pakhtunkhwa.

Rafique further said: “Besides us, our allies have extreme reservations about talking to them (PTI) and not give them any kind of face-saving.”

He said that their viewpoint was that “assemblies are made for legislation and governance, not for dissolving”.

“They should sit with us for unconditional negotiations,” said Minister for Railways Khawaja Saad Rafique addressing a joint press conference with Federal Minister for Interior Rana Sanaullah.

Earlier, Minister for Defense Khawaja Muhammad Asif stated the government was engaged in the relief and rehabilitation works after flood devastation and going for elections at this point in time was not in government’s priority.

The talks with the PTI could only happen if the conditions were not placed before the government.We can have a discussion with PTI for streamlining the economic sector, Khawaja Asif added.

Since ouster in April by no-confidence motion the PTI has been demanding eraly general elections.Imran Khan invited the PDM-led government to talk over the possibility of early polls and warned that around 66% of Pakistan would have to vote for by-polls if the government in Punjab and Khyber Pakhtunkhwa dissolved the assemblies.