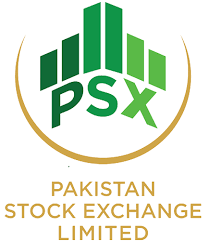 PSX lost 865 points today which is 2.2% of the market
PSX lost 969 points but recovered and closes at 42,071
State Bank of Pakistan interest rate hike of 16% played the key role of panic selling

Investors at the Pakistan Stock Exchange (PSX) adopted dump-and-run motion as the benchmark KSE-100 index plunged over 865 points today. The PSX opened at 42936.73 today and saw a sharp slump right after the opening bell, dropping more than 600 points to 42,282.48 in the first 30 minutes of trading. 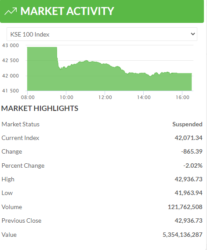 The State Bank of Pakistan (SBP) revised up its projection for average inflation reading to 21-23% for the current fiscal year 2023 compared with the earlier 18-20%.

The SBP raised its key policy rate by 100 basis points to a 24-year high of 16pc last week in a decision that went against market expectations but, according to the central bank, was “aimed at ensuring that elevated inflation does not become entrenched”.

The decision reflected the SBP monetary policy committee’s (MPC) view that “inflationary pressures have proven to be stronger and more persistent than expected”, the central bank said in a statement after a committee meeting. The move brings the SBP interest rates hikes to 625 basis points this year.