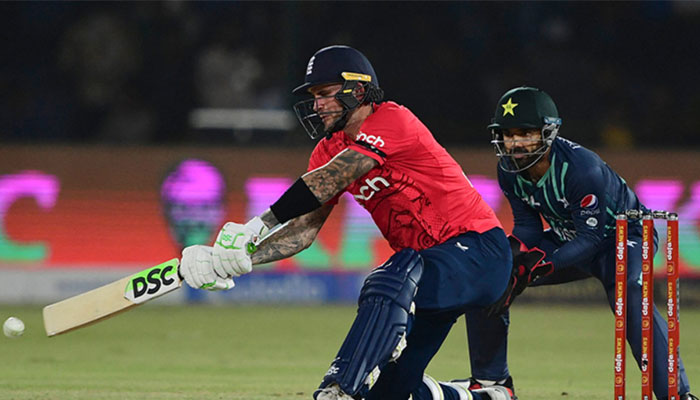 England left-handed batter David Malan played a magnificent knock of 78 and powered his side to a massive total of 209/3 and crushed the Team Green’s batting line -up with their strong bowling strategy and won the final.

The terrific partnership between Malan and Brook sets an amazing target 209 in alloted 20 overs for the hosts team.

Chasing 210, Pakistan suffered a double blow when captain Babar Azam (4) and Mohammad Rizwan (1) departed in quick succession as England’s pace attack made early inroads and reduced the hosts to 33-3 under the lights at Gaddafi Stadium.

Shan Masood put up some resistance with a fighting 56 but England, led by Woakes (3-26), kept chipping away with regular wickets. David Willey returned figures of 2-22 while Reece Topley, Adil Rashid and Sam Curran picked up a wicket each.

In the last game, England batters thrashed the host’s bowling side with only spinner Shadab Khan taking 2-34.

Earlier, Pakistan’s middle-order batter Haider Ali, who was earlier admitted to a hospital due to a viral illness, has been discharged.

England white-ball captain Jos Buttler appears unlikely to play despite his rehabilitation from a calf injury and Moeen Ali will continue as skipper in his absence, reports suggest.

As England visited Pakistan for the first time in 17 years, full houses in stadiums greeted the teams at all six games, and they got top-notch security.