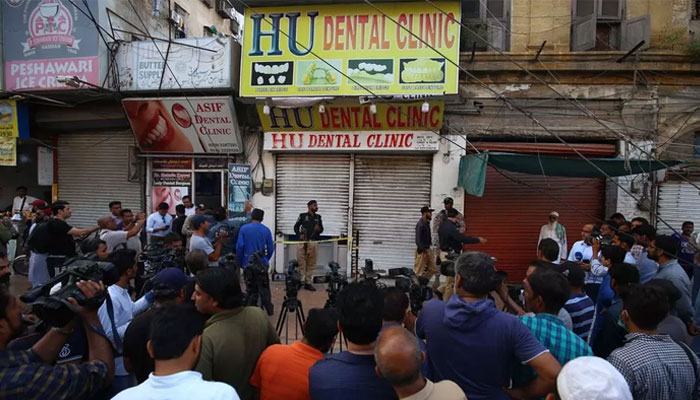 An armed attacker posing as a dental patient has killed a Chinese – Pakistani dual national and injured two others at a clinic in Pakistan’s southern port city of Karachi.

An armed attacker posing as a dental patient has killed a Chinese -Pakistani dual national and injured two others at a clinic in Pakistan’s southern port city of Karachi, police has said.

A man entered the private clinic in the Saddar neighbour hood at around 4pm local time (11:00 GMT) on Wednesday and opened fire 15-20 minutes later, killing a Chinese -Pakistani employee Ronald Raymond Chou on the spot and injuring Richard Hu and Phen Teyin, Senior Superintendent of Police Syed Asad Raza said in a statement.

Hu and Teyin, also Chinese-Pakistani nationals, were transferred to the Jinnah Postgraduate Medical Centre. Hu had run the clinic for over 40 years.

CCTV of the clinic and the nearby shops was retrieved in the attempt to identify the assailant, who was wearing a red cap, blue trousers and shirt.

He fled the scene with the help of an accomplice aboard a motorbike parked around the corner from the clinic.

The area has been cordoned off to enable police to collect additional evidence.

No one claims responsibility

Interior Minister Rana Sanaullah Khan condemned Wednesday’s killings in Karachi. “Such incidents are intolerable. The security of Chinese residents should be ensured in every way,” he tweeted.

No one has claimed responsibility for the attack.

Police are investigating whether the attacker had personal motives or whether the incident was an act of “terrorism”.

Chinese nationals have been targeted by Baloch separatists in recent years. The attacks have picked up pace recently, most notably an attack on Chinese teachers at the University of Karachi earlier this year.

The separatists have warned the government of China that its nationals would be targeted if they did not withdraw commercial activities in the southwestern province of Balochistan, which the rebels want to secede from Pakistan.