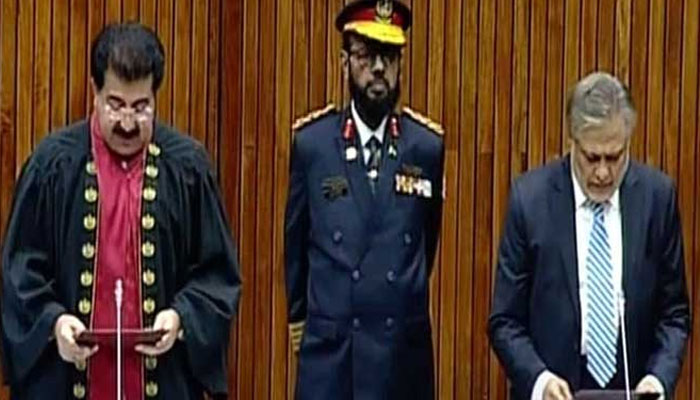 As per details, the oath had been administered by Chairman Senate Sadiq Sanjarani.

During the swearing-in ceremony, Pakistan Tehreek-e-Insaf (PTI) members tore the copies of the agenda of the meeting and surrounded the dais, in a bid to register their protest. They also chanted slogans.

The Senate chairman, however, directed all members to maintain the decorum of the Upper House.

He is expected to be sworn in as Finance Minister, as PML-N leader Miftah Ismail formally resigned from his post today, paving the way for party stalwart Ishaq Dar to take over.

It is pertinent to mention here that the former federal minister has been out of the country since 2017, owing to his medical treatment abroad.

PML-N leader Dar left Pakistan five years ago and has since been declared a proclaimed offender in a corruption case filed against him by the National Accountability Bureau (NAB). He is wanted in multiple cases.