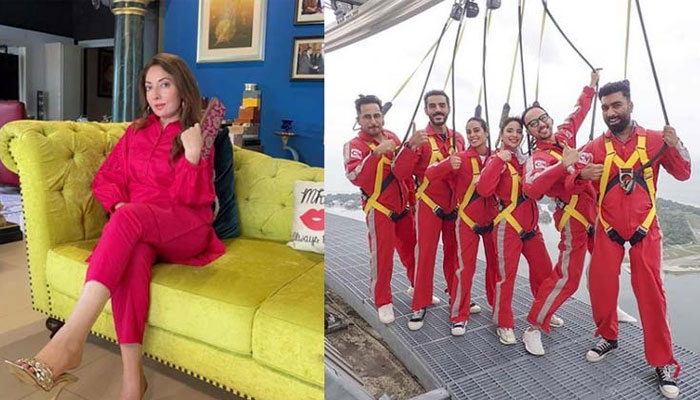 (PPP) leader Sharmila Faruqi is disappointed with the Pakistani celebrities (with the noted exception of Hadiqa Kiani) for not doing enough for flood relief. In an Instagram post, she shared pictures of several celebrities in Canada for the Hum Awards juxtaposed with photos of Hollywood actor Angelina Jolie in Pakistan.

Pakistan is going through a horrible time. Climate change is having one of the biggest effects on a country that only puts out less than 1% of the world’s carbon. The country has the biggest glaciers outside of the Arctic. Rising temperatures around the world are destroying the country, killing millions of people and causing billions of dollars in damage to property.

In the middle of all this destruction, celebrities from around the world are also going to Pakistan to raise awareness and help the flood victims in any way they can. Angelina Jolie is also in Pakistan. After meeting the flood victims and seeing the destroyed areas, she said she had never seen anything like it.

Sharmila Faruqui was, however, disappointed. She is an active member of the party in power in Pakistan, the Pakistan Peoples Party, and she is also friends with most of the famous people in show business. She wrote on Instagram that it was wrong for actors to go to an award show when their country was in trouble and a famous person from another country was helping them.

“Here is Angelina Jolie visiting our worst flood affected district Dadu, spreading love and hope, appealing to the international community to come for our help, On the other hand, are our Pakistani shining stars all in Toronto for Hum TV awards, making merry and ready for some scintillating performances, Not a single one of them even bothered to visit any flood affected area or show any solidarity in cash or kind except for Hadiqa Kiani, for one truly believe in cultural activities, award shows, performances etc, our artists and actors are second to none, Kiani, the singer, has been very actively campaigning for donations for her charity organization Vaseela. She recently announced that she would be “adopting” villages in Sindh and Balochistan and rebuilding them. It would have been a great support if all of them had reached out to their fellow countrymen who have lost their homes, lives and livelihood to the devastating floods. There is a time for everything, to celebrate, to mourn… we have a humanitarian crisis in our country, this is the time to stand by them, with them, to hold, support and love them. Each one of us has a responsibility towards our nation and its people who have given us so much. It’s payback time,”

As soon as Sharmila Faruqui said something, people were quick to respond. As she is a politician and her party is in power, many people started to criticise her, saying that it is not an actor’s job to help flood victims. Other people agreed with her that it is a sensitive time and that the show should have been put off.