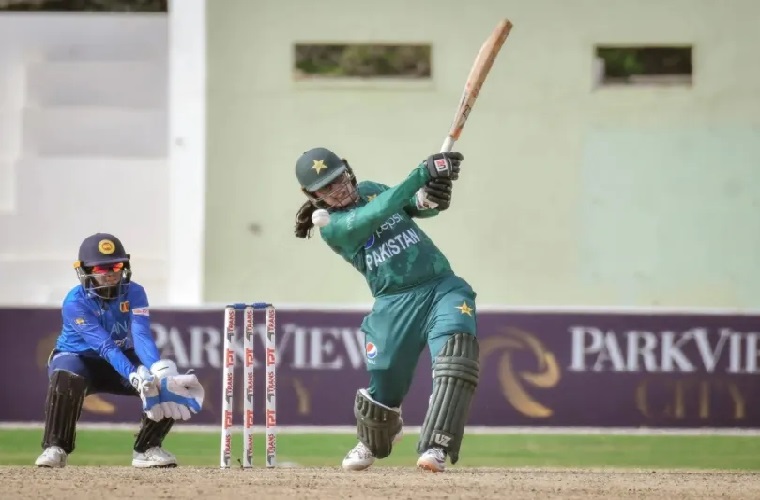 Karachi- Ayesha Naseem smashed a scintillating unbeaten 45 to help Pakistan register a seven-wicket win over Sri Lanka in the second T20I at the Southend Club, Karachi on Tuesday.

The palm sealed a series win for Pakistan with the third and final match of the series to be played on Saturday. The Bismah Maroof- led hosts had won the first match by six lattices on Tuesday.
On Thursday evening, Ayesha, latterly arbitrated player- of- the- match, took the attack to the Sri Lankan bowlers as Pakistan made light work of the 103- run target despite the early loss of three lattices. Ayesha’s 45 came out 31 balls and included five fours and one six.
The right-hander added 70 runs for the fourth gate in 58 balls with Bismah who returned not out on 22 off 29 balls( one four).
Pakistan registered the palm when Ayesha hit a four with 17 balls to spare.
Before Sri Lankan captain Chamari Athapaththu won the toss for the alternate successive time and like Tuesday, decided to club first. Anam Amin who had dismissed Athapaththu in the first game made the big advance again moment by transferring the left- hander reverse to the dressing room for five. Oshadi Ranasinghe fell for eight to Nida Dar to leave Sri Lanka wobbling at 28 for two after7.1 overs.
Hasini Perera added 34 for the third gate with Nilakshi de Silva, Perera who top- scored for the excursionists with 35 out 51 balls( three fours) was dismissed by leg- incentive Tuba Hassan.
Sri Lankan batters failed to break the impediment throughout the innings as they finished their 20 overs for a paltry 102 for six. For Pakistan, Tuba, Anam, Nida, Fatima Sana and Aimen Anwar all took a gate all.
Tuba who picked the player- of- the- match award in her debut on Tuesday had another excellent spin with the ball as she conceded a bare 13 runs in her four overs while counting for Perera.