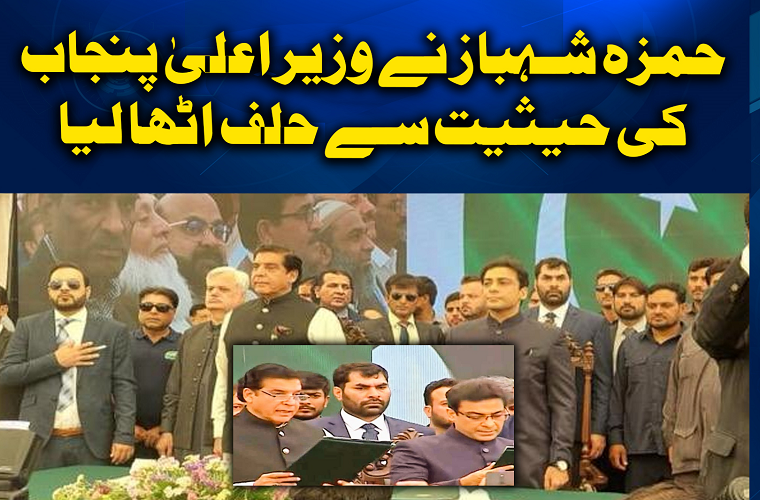 Speaker of National Assembly Raja Pervaiz Ashraf administered the pledge to CM-elect Hamza Shahbaz on directions of the Lahore High Court (LHC).
Outside the Governor’s House, heavy deployments of police and security have been tensed.
Hamza was tagged as Punjab’s chief minister on April 16. But, he hasn’t sworn in yet as his pledge-taking was remitted doubly despite the LHC’s directives for not delaying the matter any further.
On Friday, the LHC directed National Assembly Speaker Raja Pervaiz Ashraf to administer the pledge to the CM-elect after President Arif Alvi, still, Punjab Governor Omar Sarfaraz Cheema failed to observe the before court orders.
Before in the day, Punjab extremity was at a decisive point, as in a shot to hamper the pledge taking of new Punjab Chief Minister, the Governor Punjab Omar Sarfraz Cheema rejected the abdication of Usman Buzdar, saying Indigenous conditions weren’t fulfilled.
Rejecting the abdication, the governor reasoned that it contravenes sub-section 8 of Composition 130 of the Constitution.
Governor also wrote a letter to Speaker Punjab Assembly Chaudhry Pervaiz Elahi, which states”As per the mentioned provision of the Constitution, an abdication of the Chief Minister to be valid must meet the mentioned prerequisites (a) the Chief Minister has to address a handwritten letter of abdication (b) it must be addressed to the Governor.i Punjab and (c) the effect thereof has to be abdication from his office”.
Still, Cheema’s precursor Chaudhry Sarwar accepted the abdication on April 1 despite this error.