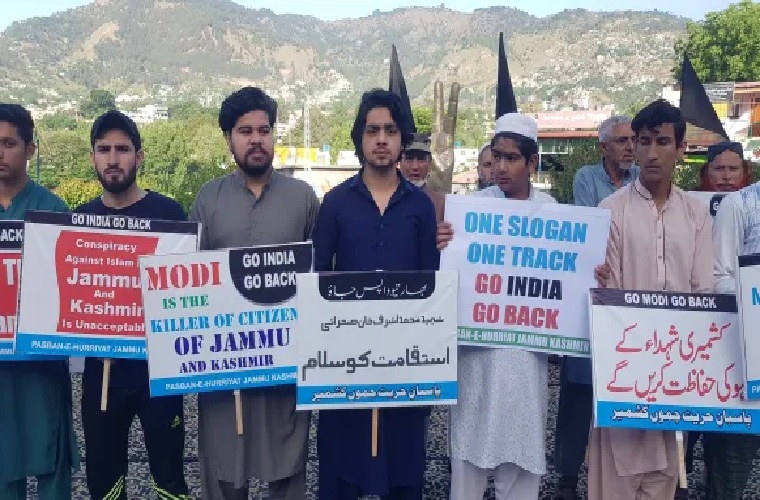 Srinagar (KMS)-Complete shutdown is being observed in Indian illegally occupied Jammu and Kashmir (IIOJK) on Sunday, on the visit of Indian Prime Minister, Narendra Modi.

Call for the strike has been given by the All Parties Hurriyat Conference to convey a strong communication to the Indian high minister that the Kashmiris reject India’s illegal occupation of their motherland and they will continue their struggle till they achieve their inalienable right to tone- determination. On the APHC appeal,anti-India demonstrations will be held in Azad Kashmir and in world major centrals by the Kashmiri diaspora against the Indian crimes in Kashmir.
Meanwhile, the occupation authorities have stationed Indian colors and police help in strength across the engaged home, particularly in Jammu region, in the name of so- called security measures ahead of Narendra Modi’s visit.
The forces’ help are conducting arbitrary checking of vehicles and frisking of passengers on the check- points which have proliferated on the roads of all major metropolises and municipalities as well as the Srinagar-Jammu trace. The police and colors are using CCTV cameras to keep a watch on the movement of people. Marksmen have been stationed at high rise structures while drone cameras and sniffer tykes have been pressed into service. Indian police have seized scores of bikes from different areas of Srinagar.
On the other hand, Kashmir Prime Minister Sardar Tanveer has said that Indian leadership has put peace of whole region on stake. He has also blazoned to stage big kick against India in Islamabad.