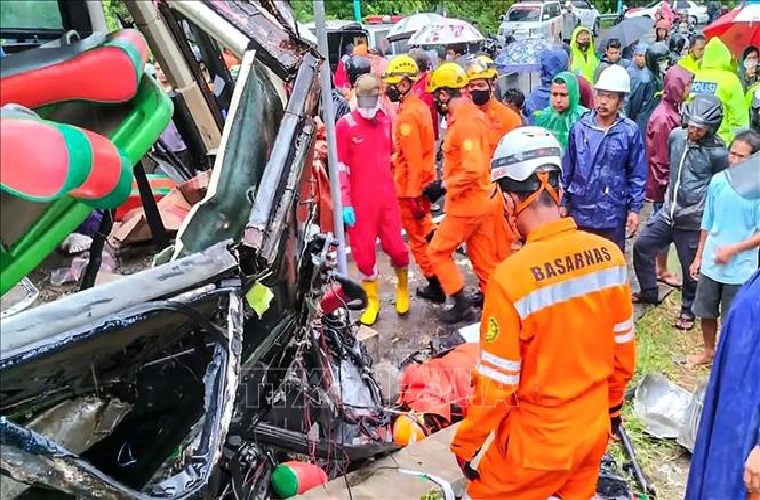 Solo -At least 13 people were killed and 34 more injured after a tour bus carrying factory workers to a beach holiday crashed on Indonesia’s Java island, according to police.

The bus and its 47 passengers were headed from Sukoharjo in Central Java to a family gathering in neighbouring Yogyakarta province when the driver lost control going downhill, officers said late Sunday (Feb 6).
“Witnesses we questioned said they saw the driver panicking as he tried to manage the gear stick, so there’s an indication the brake was not functioning or faulty,” Bantul district police chief Ihsan, who like many Indonesians uses only one name, told a media briefing.
Deadly traffic accidents are common in the archipelago nation of 270 million, where vehicles are often old and poorly maintained and road rules are routinely ignored.
“Thirteen people died. Some died on the scene and others died while being treated in the hospital, while 34 others were injured,” Ihsan said, adding the injured had been taken to three nearby hospitals.
The driver was among those who died when the bus tipped over and slammed into the side of the road, destroying the front of the vehicle and badly damaging its right side.
Multiple passengers sustained head injuries and three toddlers were also hurt, according to the police chief.

APHC accuses India of maligning the Hurriyet leaders of IOJK