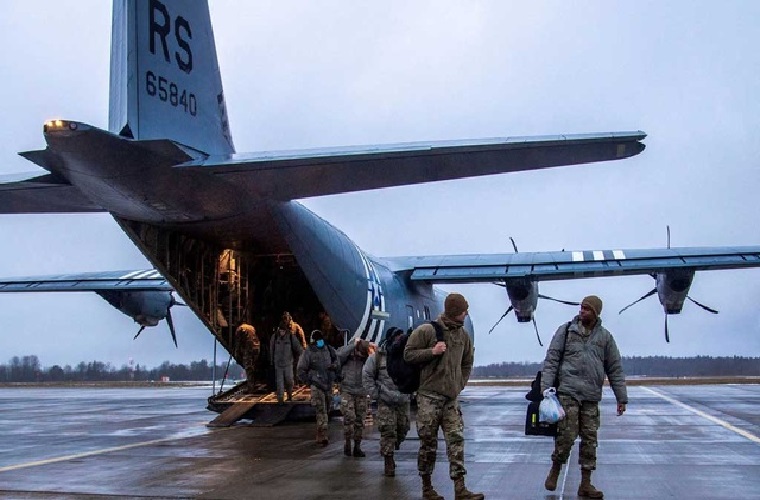 Washington (Reuters) – The United States will send nearly 3,000 extra troops to Poland and Romania to shield Eastern Europe from a potential spillover from the crisis over the massing of Russian troops near Ukraine.

Russia has denied plans to invade Ukraine but signalled it was in no mood for compromise by mocking Britain, calling Prime Minister Boris Johnson “utterly confused” and accusing British politicians of “stupidity and ignorance”.
Moscow has deployed more than 100,000 troops near Ukraine’s borders and says it could take unspecified military measures if its demands are not met, including a promise by NATO never to admit Kyiv.

US and Russia met in Geneva to defuse the standoff over Ukraine
A Stryker squadron of around 1,000 US service members based in Vilseck, Germany would be sent to Romania, the Pentagon said, while around 1,700 service members, mainly from the 82nd Airborne Division, would deploy from Fort Bragg, North Carolina, to Poland. Three hundred other service members will move from Fort Bragg to Germany.
US President Joe Biden said the deployment was consistent with what he had told Russian President Vladimir Putin: “As long as he is acting aggressively we’re going to make sure we can reassure our NATO allies and Eastern Europe that we’re there,” he said, according to media reports on Twitter.
The objective, Pentagon spokesperson John Kirby said, was to send a “strong signal” to Putin “and frankly, to the world, that NATO matters to the United States and it matters to our allies”.
“We know that he also bristles at NATO, about NATO. He’s made no secret of that. We are making it clear that we’re going to be prepared to defend our NATO allies if it comes to that. Hopefully it won’t come to that.”
Poland’s Defence Minister Mariusz Blaszczak said the US deployment was a strong sign of solidarity. NATO Secretary-General Jens Stoltenberg also welcomed it, saying the alliance’s response to Russia was defensive and proportional.
Efforts to reach a diplomatic solution have faltered, with Western countries describing Russia’s main demands as non-starters and Moscow showing no sign of withdrawing them.
French President Emmanuel Macron said he would discuss the crisis with Biden in the coming hours and may travel to Russia to meet with Putin. The priority was to avoid tensions rising, Macron said. German Chancellor Olaf Scholz said he would meet Putin in Moscow soon, without giving a date.
The Kremlin said Putin told Johnson that NATO was not responding adequately to its security concerns. Johnson’s office said he had told Putin an incursion would be a “tragic miscalculation” and they had agreed to apply a “spirit of dialogue”.
On Tuesday Johnson had accused Russia of holding a gun to Ukraine’s head, drawing caustic remarks from Kremlin spokesman Dmitry Peskov before the call with Putin. Johnson had rescheduled the call to answer questions in parliament about accusations his staff violated COVID-19 lockdown rules.
“Russia and President Putin are open to communicating with everyone,” Peskov said. “Even to someone who is utterly confused.”
Russia’s Foreign Ministry mocked Johnson’s foreign secretary, Liz Truss, for saying in an interview that Britain was “supplying and offering extra support into our Baltic allies across the Black Sea” – two bodies of water that are on opposite sides of Europe – “as well as supplying Ukrainians with defensive weapons.” The UK Foreign Office later said she was listing separate geographic areas of support.
“Mrs Truss, your knowledge of history is nothing compared to your knowledge of geography,” Russian Foreign Ministry spokesperson Maria Zakharova wrote in a blog post. “If anyone needs saving from anything, it’s the world, from the stupidity and ignorance of British politicians.”
Bear Vs Fox:
A day earlier, in his first public comments about the Ukraine crisis this year, Putin suggested that Russia was being forced to protect itself from U.S. aggression.
Washington has said it will not send troops to Ukraine itself to shield it from a Russian attack, but would impose financial sanctions on Moscow and send arms to help Ukrainians defend themselves.
Russia, still Europe’s main energy supplier despite being under US and EU sanctions since annexing Crimea from Ukraine in 2014, brushes off additional sanctions as an empty threat.
Washington and its allies have rejected Russia’s two main demands – that Ukraine be barred from ever joining NATO and that deployments of troops in eastern European countries that joined the alliance after the end of the Cold War be rolled back.
Spanish newspaper El Pais released what it said was a leaked copy of a US response to Russian demands, in which Washington offered talks with Moscow on an agreement for both sides to refrain from stationing offensive missiles or troops in Ukraine.
Washington could also provide reassurance that it had no cruise missiles in Poland or Romania, and discuss steps to prevent dangerous incidents at air or sea, said the document, which appeared to be in line with the public US position.
“I have seen nothing to suggest these documents are not authentic,” State Department spokesperson Ned Price said.
“What we have conveyed … are proposals for further diplomatic engagement. This will require engagement in good faith, some concerted fairly technical discussions, if they are going to result in anything,” he said.