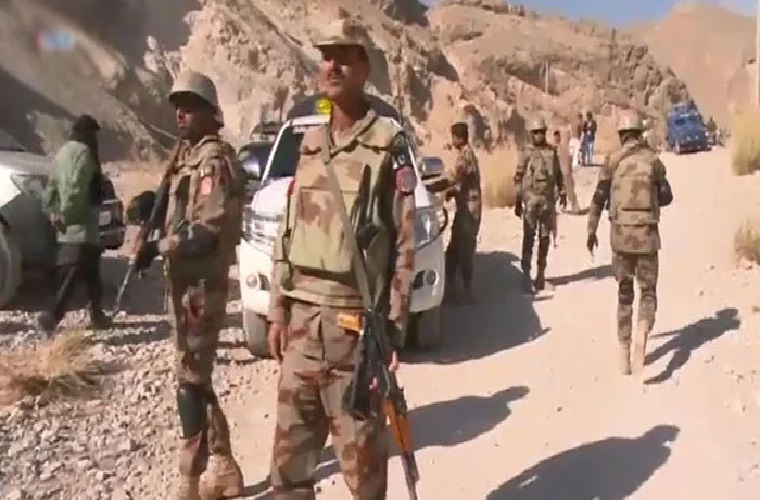 Quetta – Seven soldiers, including an officer, embraced martyrdom while 13 terrorists were killed in an exchange of fire when terrorists attempted to attack security forces camps at two locations – Panjgur and Naushki – in Balochistan on Wednesday night.

According to a press release issued by the ISPR, both attacks were successfully repulsed while inflicting heavy casualties to terrorists.
In Panjgur, terrorists tried to enter security forces camp from two locations. However, timely response by troops foiled terrorist attempt. During an intense exchange of fire, one soldier was martyred and nine terrorists fled while their casualties are being ascertained.
In Naushki, terrorists attempted to enter FC camp which was promptly responded. Six terrorists were killed. An officer was injured during the shootout.
After successfully repulsing terrorist attacks at Panjgur and Naushki yesterday night, security forces carried out a clearance operation to hunt down terrorists hiding in the area.
In Naushki, security forces encountered and killed five more terrorists bring tally to nine. Our four brave soldiers, including an officer, embraced martyrdom while repulsing the attack.
In Panjgur, the security forces operation is continuing to eliminate fleeing terrorists. Four terrorists have so far been killed at Panjgur while at least 4/5 are encircled by security forces.
During an intense fighting, three soldiers embraced martyrdom and four soldiers are injured. As per initial investigation, intelligence agencies have intercepted communications between terrorists and their handlers in Afghanistan and India.
The ISPR also said that Pakistan Army carried out clearance operations on Wednesday night to hunt down terrorists hiding in these areas and successfully repelled two attacks in Panjgur and Nushki. It added that six soldiers and one officer embraced martyrdom.