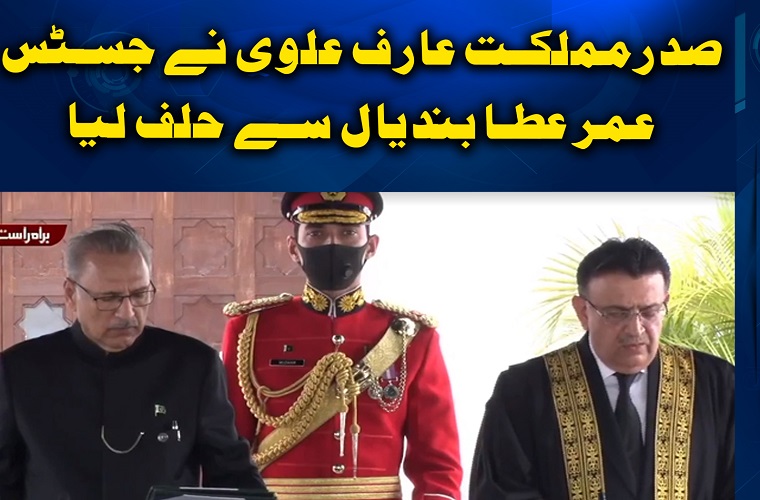 Islamabad -Justice Umar Ata Bandial was sworn in as the 28th Chief Justice of Pakistan in an oath-taking ceremony at the Presidential Palace, Islamabad on Wednesday.

President of Pakistan Dr Arif Alvi administered the oath to Justice Bandial in the presence of Prime Minister Imran Khan.
Senior army officials, judges, lawyers and federal ministers also attended the ceremony.
Earlier, Justice Bandial in his address to the full court, said that judges correct their own errors, which is why the minority changed into majority in Justice Faez Isa’s case.
“A social media campaign was launched against judicial orders,” he said.
The top judge said that personal attacks are being made against judges on social media, urging the Bar to play its role against criticism before the apex court takes notice.
Justice Bandial has replaced Justice Gulzar Ahmed, who has served as the top judge of Pakistan from December 2019 till February 1, 2022.
The change has taken place on the principle of seniority in which the puisne judge becomes the chief justice.
‘Burden of pending cases needs to be lightened’: CJP
Later, at his first appearance in a courtroom as the CJP, Justice Bandial interacted with lawyers.
“We need to lighten the burden of pending cases. Lawyers should come prepared and avoid seeking extensions,” he said.
The lawyers welcomed and congratulated the newly appointed top judge.
At this, Justice Bandial thanked them and said it was a pleasure for him to be with them.
On the occasion, senior lawyer Naeem Bukhari said that he would await Justice Bandial’s retirement so that he can meet him again. This was responded to in a pleasant way by the CJP.
Justice Bandial will continue as the chief justice till his retirement on September 18, 2023, and will hold the position for some 19 months.
The top court judges, including the chief justice, retire once they are 65, while high court justices superannuate on reaching 62 years of age under the constitution.
Justice Gulzar Ahmed assumed the office of the chief justice on December 21, 2019 replacing Chief Justice Saqib Nisar, who is of late embroiled in controversies relating to his incumbency as the top judge amid calls for investigations by a judicial forum.