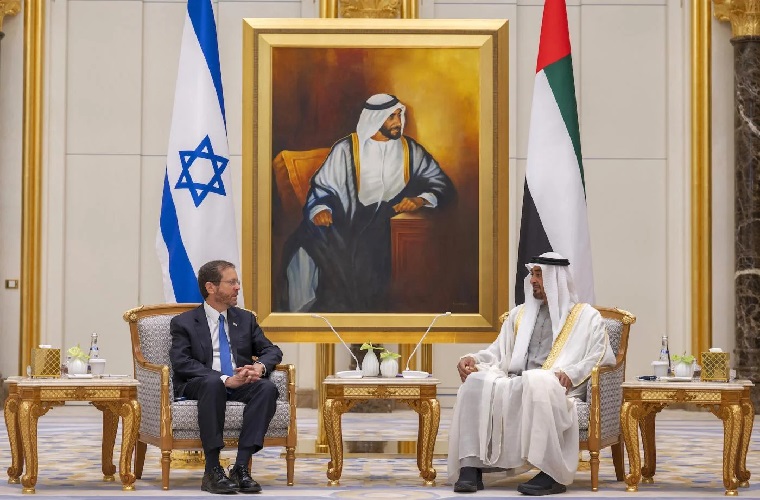 Herzog, who is travelling with the first lady, is scheduled to meet with Abu Dhabi Crown Prince Sheikh Mohammed bin Zayed Al-Nahyan and Foreign Minister Sheikh Abdullah bin Zayed Al-Nahyan, his office said.
“Flying now with my wife Michal for a historic visit in the United Arab Emirates, which symbolises above all the promise of peace between nations,” he tweeted before departing to Abu Dhabi.
Herzog will also sit down with the UAE prime minister and ruler of Dubai, Sheikh Mohammed bin Rashid Al-Maktoum, and visit the Expo 2020 Dubai, his office added.
The visit comes some 16 months after the wealthy Gulf country forged diplomatic ties with Israel, becoming the third Arab nation to do so after Egypt and Jordan.

The Emirati ambassador in Israel, Mohamed Al Khaja, tweeted Saturday that the trip was previously scheduled for January 9 but “was postponed due to Covid-19 conditions”.
“We look forward to this historic visit, which will enhance the bilateral relations… as we aim to sign important economic and trade agreements between the two countries in the near future,” he added.
The UAE-Israel normalisation deal was part of a series of US-brokered agreements known as the Abraham Accords, pacts that have angered the Palestinians.
The deals broke with decades of Arab League consensus against recognising Israel until it signs a peace agreement establishing a Palestinian state with a capital in east Jerusalem.
Prime Minister Naftali Bennett made history last month when he became the first Israeli head of government to visit UAE, in a trip that partly focused on international talks on Iran’s nuclear programme, a top Israeli security priority.
Herzog, whose position is largely ceremonial, is the first Israeli head of state to officially visit the UAE.