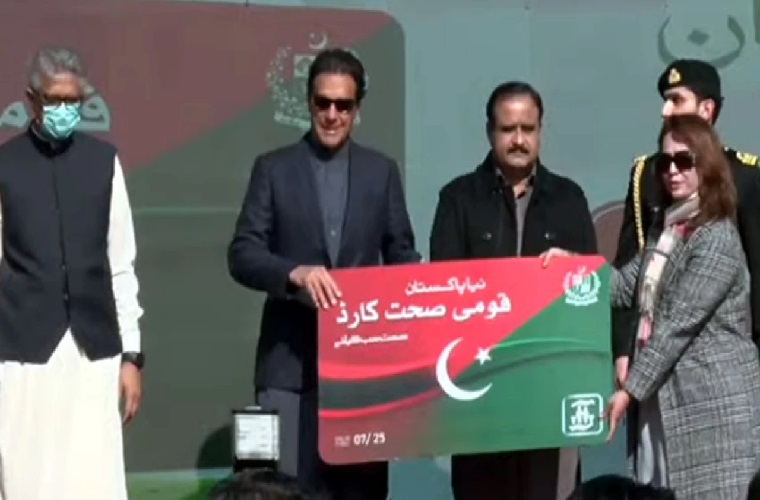 Under the scheme, all families of Islamabad, Punjab, Azad Jammu and Kashmir, Gilgit-Baltistan and Tharparkar will be provided free medical treatment at government and private hospitals.
The card will enable every family to avail healthcare facilities up to one million rupees in a year.
Addressing the launching ceremony of the scheme, Prime Minister Imran Khan said Pakistan is the only country in the world to introduce such a unique ambitious program for providing free health facility to its citizens.

He said through this card people cannot only get free treatment in government hospitals but also in private ones of their choice.
The Prime Minister said health issues create economic problems for the people and our vision behind this scheme is to at least relieve them of the economic suffering when they get ill.
He said when people own their country, only then the country achieves the ideal of national security but when people are deprived of their basic needs how would they think of the nation and national interest.
Earlier, Prime Minister’s Special Assistant on National Health Services Dr Faisal Sultan said this Sehat Sahulat Card is a step toward a welfare state.
He said for now this facility is for In-patients only but in future it will be expanded for outdoor patients.
Chief Minister Punjab Sardar Usman Buzdar briefed about the scheme and said all 36 districts of the province will be covered by the scheme by the end of March this year.
He said Punjab government is spending 400 billion rupees for the scheme.
He said 23 new hospitals are being established in the province including 8 mother and child hospitals while 158 hospitals have been upgraded.
The prime minister said anyone with the card could get themselves treated at any private medical facility, lamenting that the country’s health system was functional only to “serve the elites”.
He said doctors did not go to rural areas to continue their practice, and as a result, people living there were unable to get quality healthcare. “People [go to] Islamabad and Rawalpindi from Mianwali to get themselves treated.”
He mentioned that the government was establishing five mother and child hospitals in view of the high mortality rate from neonatal and pregnancy complications.

Over 198500 Corona patients have recovered from the disease so far