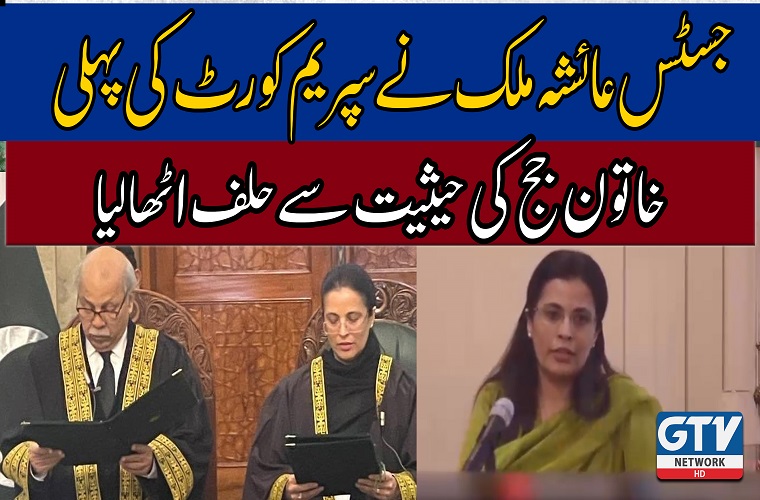 Islamabad – Justice Ayesha Malik has taken oath as the first-ever female judge of the Supreme Court (SC) of Pakistan after being elevated from the Lahore High Court (LHC).

For the first time in the history of Pakistan, a woman has taken oath as the judge of the country’s top court in the South Asian country.
Reports in local media said Chief Justice of Pakistan (CJP) Gulzar Ahmed administered the oath to her at a ceremony in the federal capital.
Judges at the Supreme Court have reached its maximum capacity of 17 after the induction of the judge from the LHC. The Judicial Commission of Pakistan recommended the elevation of Justice Ayesha.
Earlier, President Dr Arif Alvi gave approval of her appointment as SC judge following a formal go-ahead to the promotion from the Parliamentary Committee on Judges Appointments.

Justice Ayesha Malik was ranked fourth in the Lahore High Court in terms of seniority but is widely respected as a capable judge. She was nominated to take the seat being vacated by Justice Mushir Alam following his retirement on August 17.
She became LHC judge on March 27, 2012, and during her nine years and 10 months tenure as LHC judge, she made a record of deciding over 35,000 cases.
Her appointment had been suggested by the Chief Justice of Pakistan and the Chief Justice of the Lahore High Court. Justice Ayesha had subsequently agreed to the elevation in writing.
Born in 1966, Malik completed her basic education from schools in Paris, New York, and Karachi, according to the LHC’s website.
She completed her BCom from the Government College of Commerce and Economics, Karachi, and studied law at Pakistan College of Law, Lahore.
She did LLM from Harvard Law School and has also worked with Fakhurddin G Ebrahim. Justice Malik has appeared in the high courts, district courts, banking courts, special tribunals, and arbitration tribunals.
The justice was called upon as an expert witness in family law cases conducted in England and Australia involving issues of child custody, divorce, women’s rights, and constitutional protection for women in Pakistan.

Egypt lauds efforts of Pakistan for regional peace and stability