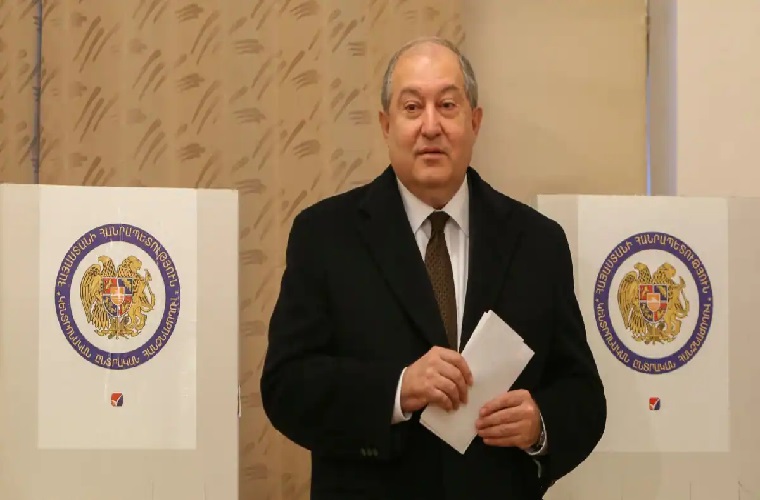 Moscow (Reuters) – Armenian President Armen Sarkissian tendered his resignation, saying he believes the country’s constitution does not give him sufficient powers to influence events.

Sarkissian, president since 2018, was in a standoff with Prime Minister Nikol Pashinyan last year over a number of issues, including the dismissal of the head of the armed forces.
The role of prime minister is seen as more powerful than that of president.

US President recognizes WW I era mass killings of Armenians as genocide
“I have been thinking for a long time, I have decided to resign from the post of the President of the Republic after working actively for about four years,” Sarkissian said in a statement published on the president’s official website.
“The question may arise as to why the President failed to influence the political events that led us to the current national crisis. The reason is obvious again – the lack of appropriate tools … – the Constitution. The roots of some of our potential problems are hidden in the current Basic Law.”
At a referendum in December 2015, Armenia became a parliamentary republic, while presidential powers were significantly curtailed.
Sarkissian in his statement did not refer directly to any particular events or issues.
Armenia agreed a ceasefire with Azerbaijan last November at their border, after Russia urged them to step back from confrontation following the deadliest clash since a six-week war in 2020 when Moscow also brokered a peace deal to end the hostilities.
Prime Minister Pashinyan has since been under pressure, with regular street protests demanding he step down over the terms of the peace agreement. Under the 2020 deal brokered by Russia, Azerbaijan regained control of territory it had lost during a war in the early 1990s.
Armenia seceded from the Soviet Union in 1991 but remains dependent on Russia for aid and investment.