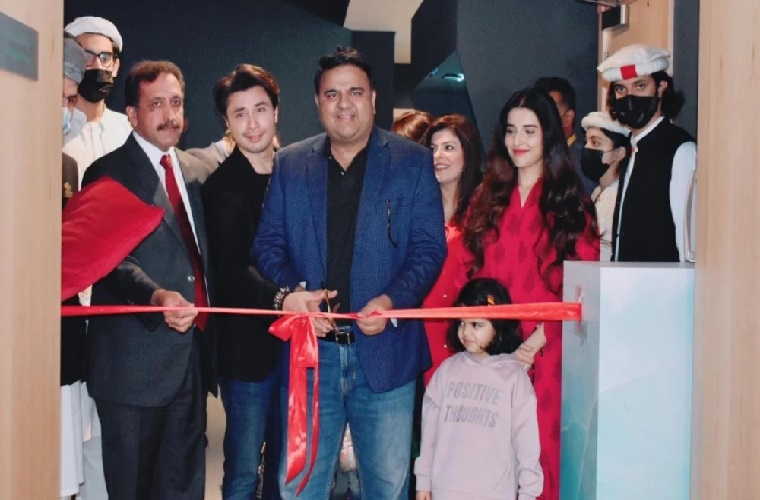 Dubai -(Web Desk) -Federal Minister for Information and Broadcasting Chaudhry Fawad Hussain said that drama, film and digital media were the best platforms to portray and promote image of a country in the world.
Addressing the inaugural ceremony of screening of Pakistani films at Dubai Expo 2020 here, he said Pakistan used to be the third largest film maker in the world in 1960s. He said then Pakistan was the second country in the world which had big cinema houses.
The film industry and cinemas in Pakistan have not received much attention since the 1970s, the Minister maintained.
The film industry was in decline due to lack of proper attention in the past, he said adding that Pakistan Tehreek-e-Insaf (PTI) government had taken steps to revive the film and drama industry in the country.
He said the government had reduced electricity tariffs of the cinemas in the country.
Moreover the government has also taken steps to revive the film industry and all taxes on the film industry have been abolished.
He said taxes had been imposed on foreign content to encourage local production houses.
He said that tax had been imposed on foreign dramas so that Pakistani artists can work in dramas and advertisements.
There were beautiful tourist spots in Pakistan where NOC procedures for film making are also being simplified, he said.
Appreciating the Pakistan Pavilion in Dubai Expo, he said that films presented there were for the international audience.
In Expo 2020, Pakistan has been promoting its cinema by screening its blockbuster films.
A total of 11 Pakistani films would be screened in the Pakistan Pavilion every Friday and Saturday till February 26.
On the first day on the occasion of the opening ceremony, Tifa In Trouble was screened.
Minister for Information Chaudhry Fawad cut the ribbon for screening films in Pakistan Pavilion.
The opening ceremony was attended by a large number of Pakistanis residing in the United Arab Emirates.
Actor Ali Zafar and actress Hareem Farooq were also present for the screening.

Nida Yasir celebrated her birthday with her friends & family