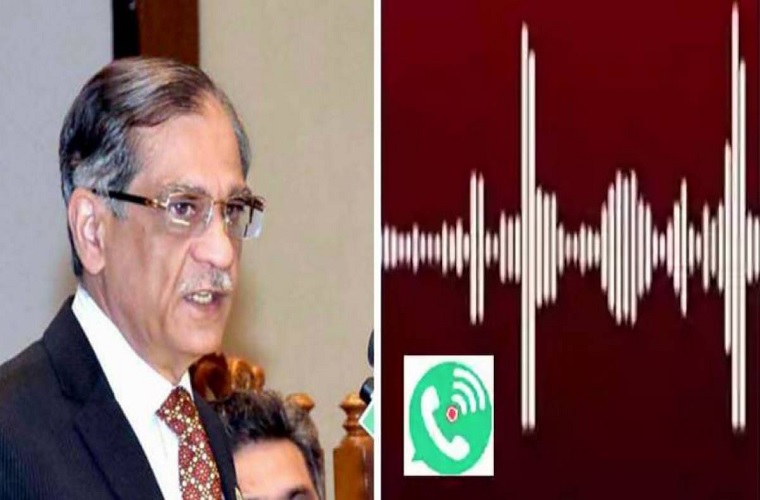 Islamabad – The Islamabad High Court (IHC) on Friday directed Attorney General of Pakistan (AGP) and the Pakistan Bar Council (PBC) to submit names of certified international forensic agencies to conduct a forensic analysis of an alleged audiotape of former chief justice of Pakistan (CJP) Saqib Nisar.
IHC Chief Justice Athar Minallah issued the directions while hearing arguments on the maintainability of a petition seeking the formation of an independent commission to ascertain the authenticity of Nisar’s alleged audiotape and probe certain events be­fore and after former prime minister Nawaz Sharif’s conviction.
The petition has been jointly filed by Salahuddin Ahmed, president of the Sindh High Court Bar Association (SHCBA), and Syed Haider Imam Rizvi, a member of the Judicial Commission (Sindh).
In the leaked audio clip, an unidentified individual, allegedly Nisar, can be heard speaking of collusion to punish former prime minister Nawaz Sharif and his daughter Maryam Nawaz in order to bring their political rival Imran Khan into power. The former top judge had branded the audio as “fabricated”.
Justice Minallah said during the hearing that it wasn’t even known if there was an original audiotape and whether it was authentic. “No accountability court is under the administrative control of this high court. On what matter related to this high court are you asking for an inquiry?” he questioned.
The judge observed that all the matters were related to a pending appeal, referring to Maryam Nawaz’s appeal against her conviction in the Avenfield reference. Justice Minallah questioned what the effect would be on that pending appeal if the court decided to order an inquiry.
“It seems that those whose appeals are underway do not want to take these matters to the court. [If] this court orders an inquiry, then it will have an effect on all pending cases,” the judge remarked.
Justice Minallah observed that an allegation was being levelled that someone else “decided the constitution of the high court’s benches” and questioned whether there was even the slightest evidence available for the claim.
“Cases cannot be decided on political grounds. You are the leader of the bar [so] bring even the slightest evidence,” the judge said to Ahmed, noting that the inquiry would have to be against the judges in the relevant bench.
The SHCBA president responded that in the leaked audiotape, it was not known who Nisar was allegedly talking to and whether the other person was even a judge or not.
Justice Minallah replied that a prima facie case would have to be made out and asked again for any evidence to be brought.
“If there is no evidence then this is an attempt to erode public confidence in the court. [If you] bring the evidence then this court has no hesitation in making a commission,” the chief justice said.
He called on the SHCBA president to suggest the name of any verified forensic agency to investigate the audio clip but the latter declined to do so, explaining that the AGP had called him a “proxy” in a previous court hearing.
Subsequently, Justice Minallah directed the AGP and PBC to submit names of verified international forensic firms. He also directed that a copy of the audiotape be provided to the petitioners.