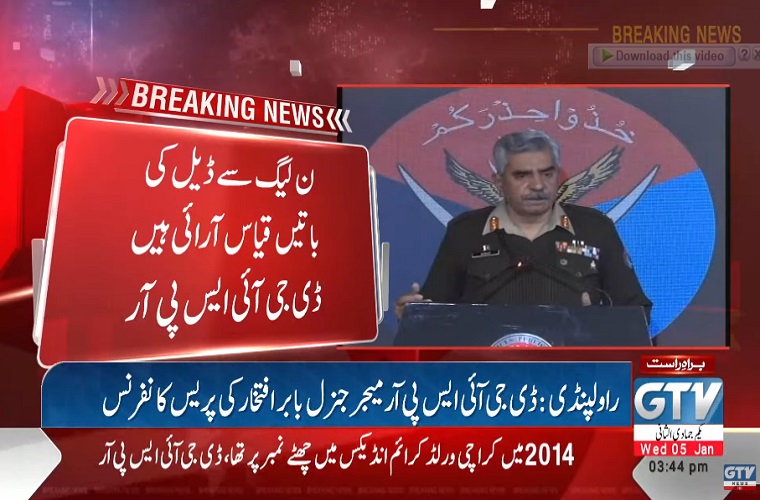 Rawalpindi – DG ISPR Maj Gen Babar Iftikhar has said the talks about a deal with the Pakistan Muslim League-Nawaz (PML-N) are baseless, adding that it should be questioned the person who says these words.
He was responding to a question during a press conference on Wednesday. He said that an organized campaign is being launched against the institutions. “Its objective to create a gulf among the government, institutions and the nation. The people in Pakistan and sitting abroad had failed in the past and will fail in future as well,” he declared.

The DG ISPR said that the current situation in Afghanistan could cause a tragedy, which will directly affect the region.
He said that India had conducted a fake encounter in the Neelum Valley. “The alleged terrorist Shabbir is still in his home and alive. India is involved in war crimes. An international journal exposed the Indian aggression,” he said.
The DG ISPR said that Pakistan supports Kashmiris right to plebiscite on January 5. “India is continuing the worst siege of human history. It is heading towards religious extremism. The balance of traditional war will be affected by the Indian steps, which will cause a negative effect in the region,” he declared.
He also maintained that there is no trouble afoot when it comes to civil-military relations and urged the media to “keep the establishment out of it”.