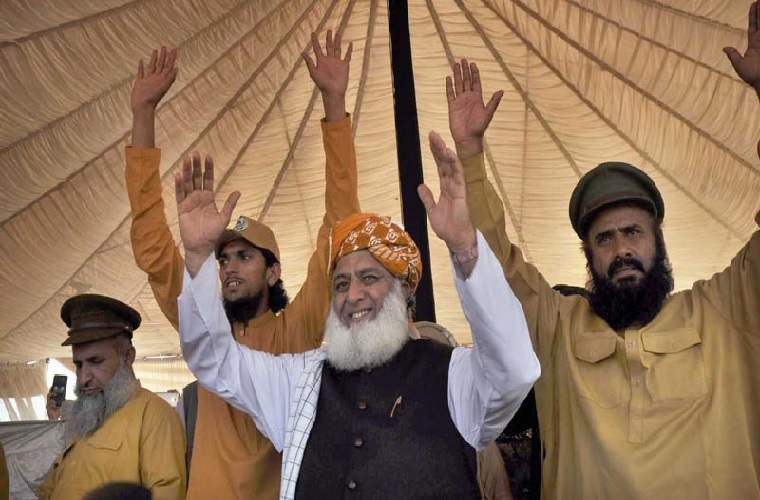 Peshawar-The Opposition parties, particularly JUI-F, have taken an unassailable lead in Khyber Pakhtunkwa’s ongoing local body elections, leaving PTI behind, according to unofficial results.
The PTI leaders have accepted their defeat as the ruling party could not grab a single mayor seat out of the four. The PTI could win a tehsil in Peshawar out of six tehsils.
Awami National Party’s (ANP) Himayatullah has been elected as the mayor in Mardan with 56,458 votes, followed by the JUI-F’s Amanat Shah Haqqani with 49,938 votes, according to unofficial results. The JUI-F’s candidates secured the remaining three seats of mayor in Kohat, Bannu and Peshawar, according to unofficial results.
According to unofficial and unverified results from 53 tehsil councils, Jamiat Ulema-e-Islam (JUI-F) is leading with 19 seats. Pakistan Tehreek-e-Insaf is at second position with 12 seats. Independent candidates have won in nine tehsils while Awami National Party (ANP) has so far won in six tehsils. Pakistan Muslim League (PML-N) has claimed three seats. Jamaat-e-Islami has won 2 seats, while Pakistan Peoples Party and Tehreek e Islahat Pakistan are following with one seat in the contest.
JUI-F’s also won the mayorship of the provincial capital Peshawar, Kohat and Bannu. In Mardan, ANP ‘s candidate for mayor swept the polls.
Elections were held in 66 tehsils of 17 districts Sunday. For the first time in the province, people have directly voted to elect tehsil chairmen/mayors.
The vote counts for these mayoral and tehsil chairmanship seats have been completed so far.

We strongly demand that the rolling of Deputy Speaker be declared null and void, Fazlur Rehman