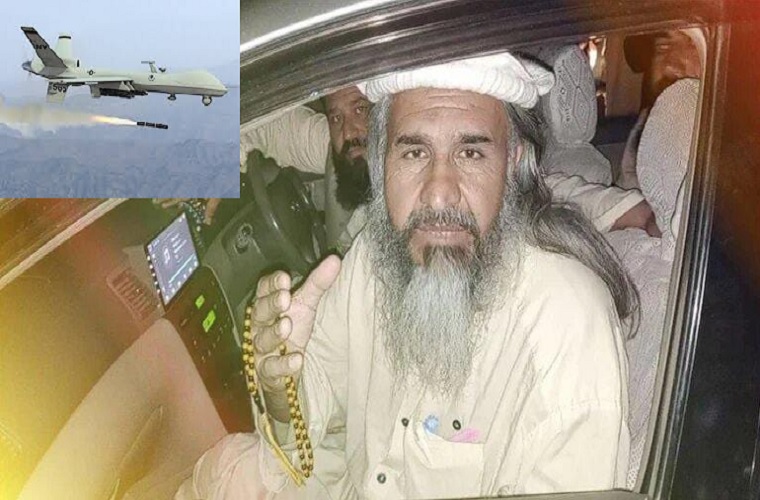 Peshawar-A top leader of the Tehreek-i-Taliban Pakistan (TTP) escaped unhurt from a suspected drone strike on a safe house in eastern Afghanistan, the militant group said on Friday.
The strike on Thursday evening came a week after a ceasefire between the banned TTP and the government collapsed, with militants accusing Islamabad of killing its fighters.
Two TTP sources currently in Afghanistan told AFP that Maulvi Faqir Mohammad was the target of what they described as a drone strike on a compound in Chawgam village, in the eastern province of Kunar bordering Pakistan.
“Maulvi Faqir Mohammad was not present at the time… two fighters of the Tehreek-i-Taliban Pakistan were wounded,” one source said.
PESHAWAR – TTP top commander Maulvi Faqir Mohammad reportedly escaped a drone strike on a compound in Kunar – the eastern province in Afghanistan.
The strike came a week after Tehreek-e-Taliban Pakistan unilaterally announced to end the month-long ceasefire with Islamabad, accusing the government of breaching peace talks.
A report of Paris-based newswire service said a drone strike hit a guesthouse on the compound near Afghanistan’s border, targeting a senior TTP member however the missile failed to explode.
The senior leader of the Tehrik-e Taliban Pakistan Maulvi Faqir Mohammad escaped unhurt. The incident occurred around 3:30 when a drone suddenly appeared in the sky on which militants told the commander to go to a safe place but he reportedly refused and argued it was not possible to hide in the daytime.
Later, the missile struck when Faqir left the compound to visit the guesthouse. Reports also added that the TTP commander was about 3 meters away from the compound when the drone fired a missile and hit the same room.
The missile didn’t explode and the people around the former deputy leader of the TTP remained safe.
TTP commander reportedly spent eight years in Afghanistan’s Bagram prison before being released by the Afghan Taliban following the end of Western-backed government in Kabul.
The banned outfit which attacked Pakistan’s security forces years to overthrow the government in Islamabad has long been known to shelter in the lawless eastern border regions of Afghanistan.
Bilal Karimi, a spokesman for the Afghan Taliban, told AFP from Kabul that the strike was an explosive fired from the ground.
The TTP emerged 14 years ago and has been blamed for around 70,000 killings by successive Pakistani governments.The terror group, which was formed 14 years ago, killed around 70,000 persons including 150 in APS carnage.
Thursday marked the seventh anniversary of the TTP massacre of nearly 150 schoolchildren in Peshawar.

Two persons killed due to Indian police firing at protesters