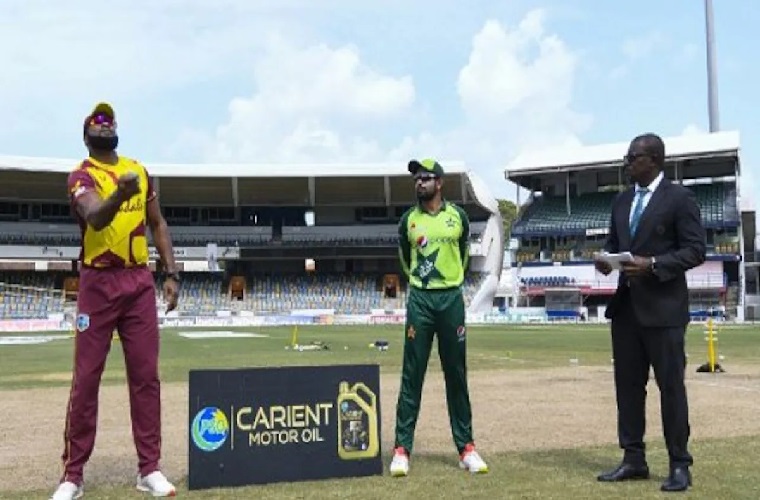 Karachi – West Indies have won the toss and choose to field against Pakistan in teh first T20 International at National Cricket Stadium in Karachi on Monday.
Pakistan skipper Babar Azam is hopeful that the Pakistani team will continue the winning streak in the limited-overs series against the virus-hit West Indies. Babar led from the front with loads of runs in the T20 World Cup in the United Arab Emirates as Pakistan went onto win its five group games before being beaten by eventual champion Australia in the semifinals. Pakistan followed their brilliant run by whitewashing Bangladesh in the T20 series 3-0 in Bangladesh before winning the two-match test series 2-0.
The visiting West Indies is without their regular captain. They have lost key players to Covid-19 – but still captain Nicolas Pooran is confident of good show against Pakistan in the 1st T20 of the series.
The notable absentees include white-ball skipper Kieron Pollard, who will miss out due to hamstring injury he sustained during the T20 World Cup, while Andre Russell is playing in the Big Bash League in Australia.
Defending champion West Indies, on the other hand, floundered in the UAE as it failed to qualify for the semifinals. Nicholas Pooran replaced the injured Pollard for the Twenty20 series while Shai Hope will lead the side in the ODIs. Babar sympathised with West Indies for losing three players due to coronavirus and believed it s tough for cricketers to spend time in isolation