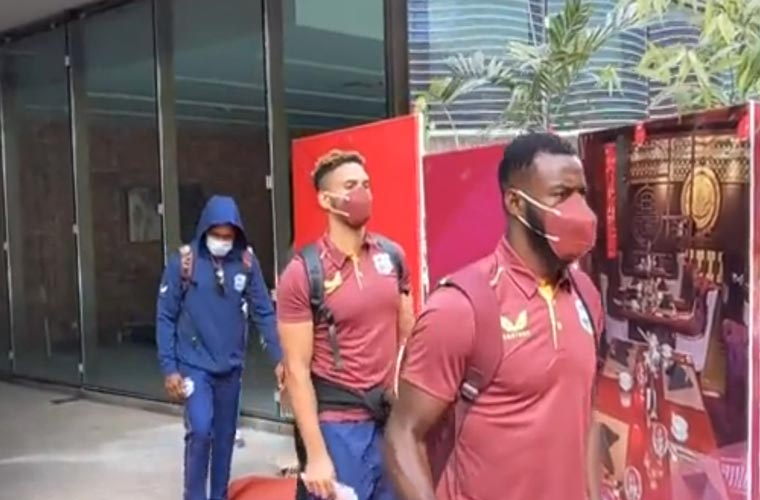 KARACHI: The West Indies cricket team arrived in Pakistan on Thursday for a visit which local officials hope will scotch bitter memories of a New Zealand tour abandoned on security grounds
The Windies will play three T20 and three One-Day Internationals — all in Karachi — starting Monday, their first visit since 2018.
A Pakistan official said a 26-member party had flown to Karachi early Thursday before being escorted by security to the team hotel.
The series comes three months after New Zealand quit their first tour to the country in 18 years hours before the opening match was due to start citing an undisclosed security alert.
That was followed by England’s decision to withdraw visits by their men’s and women’s teams scheduled for October.
Pakistan officials were furious with the cancellations, arguing security measures were lock-tight.
The cricket-mad nation endured a long spell without a visit from an international team following an attack on a bus carrying the Sri Lankan team in Lahore in 2009.
Pakistan were forced to play their home international matches abroad — mostly in the United Arab Emirates (UAE) — until 2015, when normal service tentatively resumed.
This West Indian squad is somewhat understrength, with regulars Evin Lewis, Shimron Hetmyer, Andre Russell and Lendl Simmons all opting out for personal reasons.
Former skipper Jason Holder is being rested, while Fabian Allen and Obed McCoy are out because of injuries.
Last week captain Kieron Pollard also withdrew through a hamstring injury, leaving the T20 leadership to Nicholas Pooran and ODIs to Shai Hope.
Four players — Akeal Hosein, Sheldon Cottrell, Dominic Drakes and Odean Smith — will join the team later Thursday.
The three T20Is are on December 13, 14 and 16, while the ODIs will be on December 18, 20 and 22.