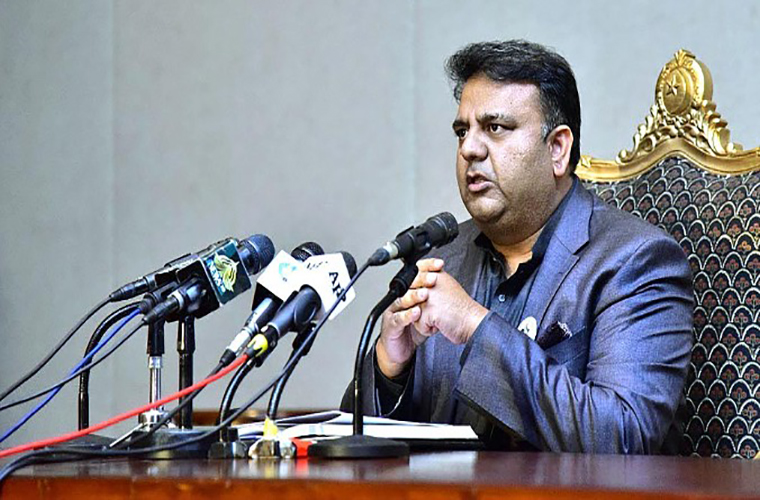 Minister for Information and Broadcasting Chaudhry Fawad Hussain made this announcement on Wednesday.

He said that the top leadership has decided to treat the proscribed Tehreek-i-Labbaik Pakistan (TLP) as a ‘militant group.’

He stated this, while briefing the media after federal cabinet meeting in Islamabad.

They made this decision due to TLP’s persistently challenging writ of the state through chaos with the support of anti-state elements.

Fawad said they made a clear policy decision in a meeting.

The minister said that we will not treat this organization as a political party.

Furthermore, he urged other concerned departments especially the Election Commission of Pakistan to play their role in this regard.

The minister said, the matter pertaining to the organization would be dealt in a same manner as of other terrorist organizations that were annihilated in the past.

Fawad referred that Pakistan had defeated terrorist organizations such as al-Qaida in the past.

Don’t make any mistake in considering Pakistan a weak state

He warned the enemies not to make any mistake in considering Pakistan a weak state.

Whosoever has committed mistake of perceiving Pakistan as a weak state, they regretted.

He also referred to long march of TLP on the Grand Trunk (GT) road.

Fawad called them a proscribed organization and a militant group instead of religious one.

He vowed not to allow the proscribed TLP to challenge writ of the state at any cost.

Last time, he said the government had made the details public as to how the social media accounts from India supported TLP.

He said, TLP soon after its origin in 2015 had become a pressure group to blackmail the government for their unjust demand.

Furthermore, he said the government of Pakistan and state had showed much restraint in the past to avoid bloodshed.

But unfortunately there was a class in their leadership which paid no heed to the human loss because their purpose was a bloodshed and unrest in the country.

Last time, he said some six policemen lost lives and more than 700 got injured.

“This is the six time, they are on roads and just a moment ago, 27 Kalashnikovs carrying people were seen participating in their march at Sadhoki,” he said.

He asked should we sit idle and allow you to come from one side and block GT road or another road.

How long should it will be tolerated.

He said the government had showed enough restraint and neither a civilian was hurt at a single place nor did resort to use force.

Govt would not allow anybody to blackmail the state and nor would it tolerate anyone challenging the writ of the state.

The minister said they should review their conduct.

Fawad warned we will not tolerate the culture of fake news which some people are following.

He also termed the issue of fake news as a matter of national security and protection of lives of citizens.

Fawad said some miscreants were getting help from India and other countries to spread fake news. “We are contacting those countries and issued direction to PTA in that regard.

Responding to a question, he said the government had already held six rounds of negotiations with TLP vagabonds in last two months sans any result.

Enough is enough, mob rule could not be allowed in the country, he said.

Nobody has the right to block highways and unfortunately the name of the Holy prophet Hazrat Muhammad (PBUH) was being used for this act.

He quoted the famous saying of the holy prophet “Removing harmful things from the road is an act of charity (sadaqah).” Narrated by Abu Dharr Al-Ghafari.

He urged Election Commission of Pakistan (ECP) to take action against TLP.

He hailed this but asked ECP to also look into the registration of TLP, registered in the name of a Dubai resident.

Fawad further said that they had made reference to declare TLP outlaw ready.

The govt would file that in the Supreme Court of Pakistan soon.

Nobody would be allowed to enforce its agenda with force.

TLP has no public support as in Khushab by elections they got only 1,400 votes.

Responding to another query, Fawad urged media to play its role to expose such terrorist organisations, who are following agenda of inimical forces.

The main agenda of TLP aims to destabilize the country.

Fawad said some 3.5 million tweets posted in favour of TLP from India during their last protests.

He further said the cabinet has asked ECP to conduct forthcoming by elections in NA 133, Lahore through Electronic Voting Machines (EVM).

He further said another suggestion was to conduct Chamber of Commerce and Industry elections through EVM.

Meanwhile, the cabinet has lamented the price control mechanism of Sindh government was very weak as edible items including flour, lentils were dearer than other provinces.

The flour bag being sold at Rs 380 per bag in Punjab was expensive than Sindh.

He said the cabinet has decided to make public the data of all provinces collected by Pakistan Bureau of Statistics (PBS).

This would enable people to have comparison of prices in provinces. In comparison, prices were significantly cheaper in Punjab as comparing to other provinces.

The prices of edible items in Sindh were higher than any other province.

But ironically, controlling the price hike was domain of provinces.

Bilawal should admonish his chief minister for price hike in Sindh.

He said it was heartening to note that the overall regional prices in Pakistan remain cheaper than regional countries.

In this regard, he compared Pakistan with India, Bangladesh and Sri Lanka, except ghee.

Moreover, cabinet has directed the concerned authorities to share a weekly comparison of regional prices with the people.

Fawad said the Ministry of National Food Security and Research briefed the cabinet about introducing modern technology in agriculture sector.

The cabinet wants to equip small farmers to use modern technology in agriculture sector for getting maximum production.

The government has already increased the support price of wheat by Rs 500 per 40kg in last three years.

A meeting would be held on Monday to discuss support price of wheat in the country.

Pakistan was seventh largest producer of wheat. Bumper crop of wheat and maize is expected this year.

Besides, it decided to encourage vertical construction of buildings.

Prime Minister emphasizes that vertical construction of building should be allowed.

The federal cabinet approved appointment of members in Expo Development Fund board for the period of one year.

Moreover, the federal cabinet has approved conducting screening test of the candidates desiring to appear in CSS examinations.

A CSS candidate would have to clear screening test before appearing into CSS exams.

Cabinet has approved inking mutual cooperation agreement with some 31 countries for taking action against culprits involved in heinous crimes.

Cabinet has authorized Railway police to take action against culprits who destroy of railway tracks even outside the jurisdiction of railway stations.

Meanwhile, the cabinet also approved more facilities for IT sector.