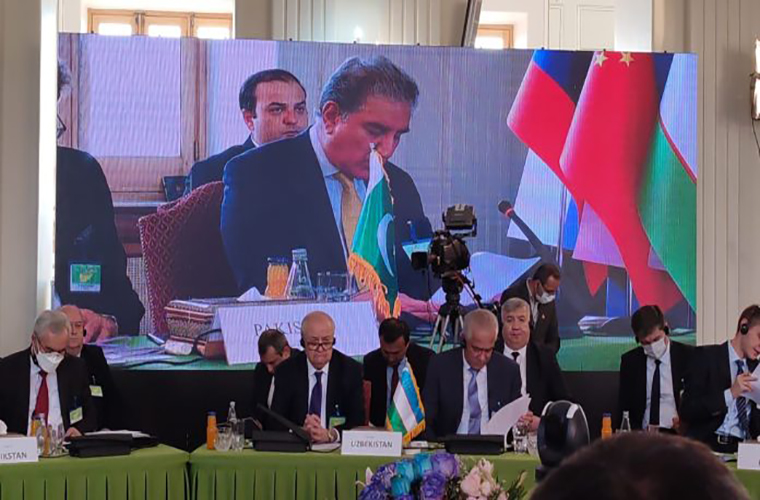 Foreign Minister Mehmood Qureshi emphasized this, while addressing the Second Meeting of Foreign Ministers of Afghanistan’s Neighboring Countries in Tehran on Wednesday.

Foreign ministers of the Islamic Republic of Iran, Turkmenistan, Tajikistan, and Uzbekistan as well as envoys of China and Russia attended the meeting.

The foreign ministers of China and Russia participated virtually.

The Second Meeting of Foreign Ministers of Afghanistan’s Neighboring Countries held in the Iranian capital.

He urged the world community to pay attention to the economic situation of the Afghan people.

Furthermore, he called upon them to prevent the occurrence of human tragedy in that country.

Qureshi also stressed the need to free the assets of Afghanistan.

Referring to Taliban’s August takeover in Afghanistan, Qureshi said the broad wave of refuge has been seen after.

About today’s Tehran meeting, the Pakistani foreign minister said it is for ensuring coordination between Afghanistan’s neighbors to manage the existing challenges.

He went on to stress that all are after seeing a stable Afghanistan.

And today’s meeting can take important steps towards this end through strengthening and focusing on the results of the first round of the meeting.

The FM underlines fight against terrorism crucial in Afghanistan.

Qureshi highlighted importance of respecting the rights of the Afghan people.

He emphasized the need to make sure their presence in the inclusive government.

Further, he called for preventing the happening of new conflicts in the region.

Qureshi also said the dispatch of humanitarian aid to Afghanistan should continue.

Earlier, Iran’s First Vice-President Mohammad Mokhber said in the meeting that the Islamic Republic of Iran supported Pakistan’s initiative to hold the first round of talks between Afghanistan’s neighboring countries.

He further said that after Pakistan Iran became the host of the second round.

Tehran welcomes the third round in Beijing.

5th Round of Bilateral Political Consultations of Pakistan and Tajikistan held