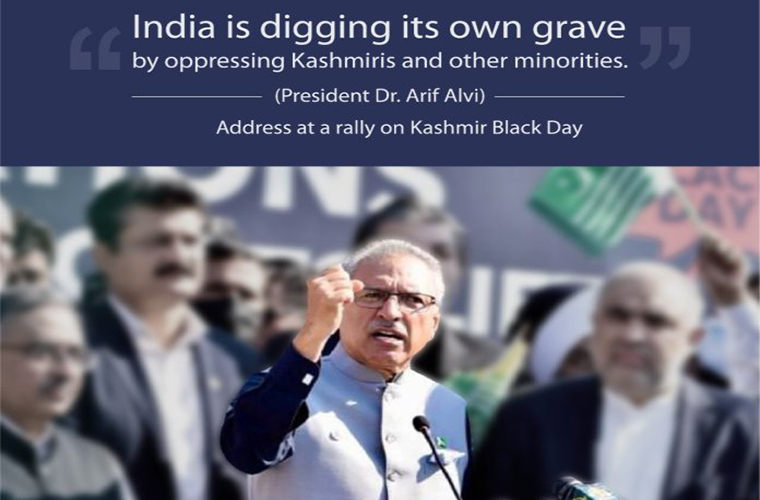 Dr. Arif Alvi said India was digging its own grave by oppressing Muslims of the Occupied Kashmir and other minorities.

While addressing the rally, he mentioned history of India blotched with dark eras of tyranny.

He predicted darker future of India under the Hindutva supremacy.

The president paid homage to the perseverance and struggle of Kashmiri people against Indian illegal domination and state-terrorism in Indian Illegally Occupied Jammu and Kashmir.

The president said the sacrifices of the Kashmiri people would pay off and Kashmir would soon witness freedom.

Furthermore, he assured the Kashmiris that the Pakistani nation would stand with its Kashmiri brothers and sisters.

President Alvi said that on October 27, 1947, India occupied Jammu and Kashmir through an illegal intervention.

He lamented the worst series of state terrorism and persecution against the Kashmiri people continues till date.

President Alvi said the fascist government of India had launched a spate of atrocities against Muslims and other minority communities.

He noted that Indian govt is doing so under the Hindutva ideology.

He underlined India’s unilateral steps to change the demographic structure of Jammu and Kashmir as illegal.

Furthermore, he noted it as a clear violation of various UN resolutions and international law.

The President vowed Pakistan would not accept these illegal steps.

Tribute to the resilience of the Kashmiri people

Moreover, Pakistan on every platform will continue to raise voice for the legitimate rights of Kashmiris.

President Arif Alvi paid tribute to the resilience of the Kashmiri people despite facing oppression for decades.

He regretted that the world had turned a blind eye to the Indian atrocities on Kashmiris.

The president also urged the international community and India to fulfill its promise of giving Kashmiris the right to self-determination in accordance with the United Nations Security Council resolutions.