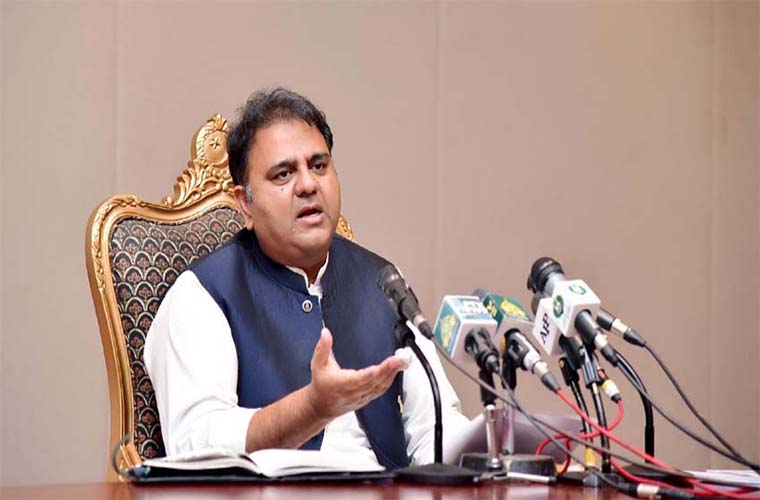 He stated this during a post Cabinet media briefing in Islamabad on Tuesday.

He said the federal government would adopt legal and the constitutional procedure over the appointment of Inter-Services Intelligence (ISI) Director General (DG).

Fawad further said that the PM Minister had the authority to appoint ISI, DG.

The PM had a detailed meeting with Chief of Army Staff (COAS) General Qamar Javed Bajwa in this regard.

Fawad categorically said that neither the Prime Minister office nor the military would take any step to damage the repute of one another.

Furthermore, he said both the leaders enjoyed good and close cooperation with each other and the final decision would be taken with mutual consensus.

The minister said there was close liaison between Pakistan’s military and political leadership and relationships were ideal.

He said that the cabinet made a land mark decision for approval of online power of attorney for overseas Pakistanis.

This government had feelings for their problems.

Fawad said that in the past, no government ever bothered to resolve the problems of expatriates.

However, the present government had attached special priority to settle their issues.

He said the PTI government took steps for repatriation of hundreds of Pakistani prisoners languishing in foreign jails in petty crimes.

The minister said the cabinet had a presentation for setting up a new unit in Islamabad police for mob handling.

This unit would be well trained and equipped with latest technology.

It would include drones and cameras to ensure that the residents of the capital remain protected from such riots. And they do not face inconvenience of road closures every now and then.

He said that Supreme Court had imposed ban on protests at D-Chowk. But still a handful people block the road there whenever they like.

He noted the new unit a very good initiative to protect the capital from protesters.

Fawad said the Cabinet had decided to include the traders coming from Afghanistan to Pakistan in visa list. Because the volume of goods being traded between the two countries had increased manifold.

The government, he said, remains keen to encourage the legal entry of Afghan people coming to Pakistan.

Therefore, it brings ease in visa regime to the convenience of the Afghan nationals.

Similarly, the minister said the Cabinet had okayed the code of conduct for visa issuance to Afghan nationals.

The visa process for Afghan nationals had also been made online due to the huge influx of people coming to the Pakistan Embassy for the issuance of visas, he added.

The minister said the cabinet also approved the proposal to give online visas to foreigners working on various China Pakistan Economic Corridor projects.

Moreover, it decided to write off visa fee for Afghan nationals.

He said the Cabinet also approved the reconstitution of the Pakistan Electronic Media Regulatory Authority (PEMRA) Council of Complaints, Islamabad.

It will have Syed Muhammad Ali Bukhari as the chairman.

It did so for regulation and promotion of the real estate sector and to protect the interest of buyers in the sector.

He said the federal cabinet had accorded approval to the establishment of ‘Rehmatulil Aalmeen’ Authority.

That would work for promoting the real image of Islam.

Furthermore, it will give advice for preparation of a curriculum for children in light of the life of the Holy Prophet (PBUH).

The minister said that the authority would work for promotion of the traits of tolerance and coexistence in the masses.

The love for the Holy Prophet was part and parcel of faith of every Muslim, who was ‘Rehmatulil Aalimeen’ not ‘Rehmatulil Muslimeen’ but unfortunately this image could not be highlighted in Pakistan in the past.

Fawad said objective of this authority would be to mold the characters of the young generation in the light of the ‘Seerat-un Nabi’ (PBUH). It would not be a traditional authority, top scholars from not only Pakistan but from all over the world would be its members, he added.

The minister said that the narrative that Islam spread through love, affection and respect and honor of the other people would be promoted and rights of minorities, women and children should be protected.

He said that at the outset, the federal cabinet offered ‘Fateha’ for the soul of renowned nuclear scientist Dr Abdul Qadeer Khan. Over 15 ministers including National Assembly Speaker, Senate Chairman, Chairman of Joints Chiefs of Staff Committee, and Naval chief attended the funeral.

It was unfortunate that there was a tendency on social media to make news from rumours sans verifying the facts, he added.

He appealed to the journalists to demonstrate responsibility and verify the news circulating on social media before reporting to their respective organizations to counter fake news and propaganda.

The minister said that cabinet was given briefing on electronic voting machines.

In almost all cabinet meetings, the issues of Electronic Voting Machines and grant of voting rights to overseas Pakistanis’ came under discussion.

The minister said the cabinet had decided to provide overseas Pakistanis’ right to franchise at every cost.

Talks would continue to extend his services as per law and the constitution.

While answering another question, he said the Prime Minister himself holds the portfolio of Minister of Overseas Pakistanis and Human Resource Development.

He said that the cabinet gave approval to renewal of licenses for K2 Air and Air Sial.

The Establishment Division informed the cabinet that out of 80 top posts, 40 filled through the process of competition.

He said that the PTI government had reconstituted Board of Directors.

It named about 80 top level appointments. And none of them was done in violation of merit.

The minister said in the past almost all appointments were challenged because of violation merit. He underlined it as a big change.

He said that the cabinet gave approval to ECC meeting decisions which it made on October 7.

However, that excluded a demand of Rs 2.4 billion for a special economic zone which the cabinet deferred.

The cabinet, the minister said constituted a sub-committee.

It would take up decisions of transport logistics committee meeting on October 4 on dredging gat. Port Qasim would give proposals.