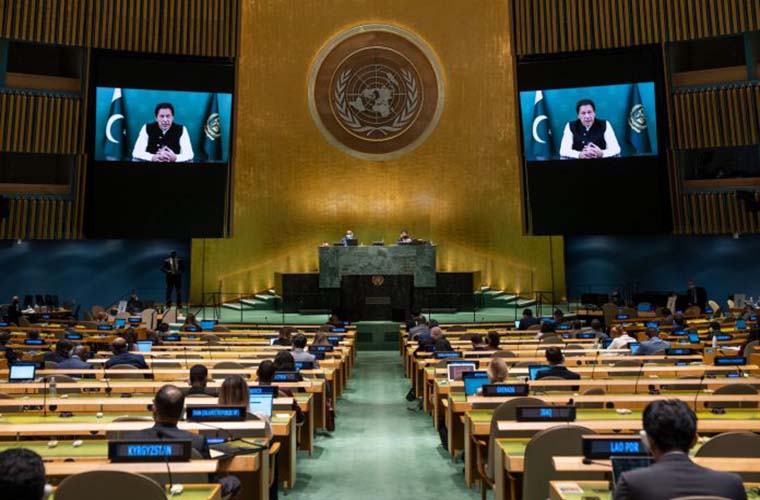 He said a “destabilized, chaotic Afghanistan” could again emerge as a safe haven for international terrorists.

Therefore, he urged the world for measures to strengthen its government for the “people of Afghanistan.”

He said huge humanitarian crisis was looming ahead which could have serious repercussions not just for the neighbours of Afghanistan but everywhere.

“This is a critical time for Afghanistan … You cannot waste time. Help is needed there. Humanitarian assistance has to be given there immediately,” Prime Minister Imran Khan told the gathering of leaders.

Pakistan has repeatedly sought the attention of the world community towards the plight of the Afghan people who after decades of war and strife need help to live in peace with adequate food, shelter and medicine.

In a pre-recorded video address, the Prime Minister spoke at length about the major global issues.

Prime Minister Imran Khan said Pakistan was the only country apart from Afghanistan, that suffered the most from the US War on Terror after 9/11 and dismissed the notion by some that his country had any part to play in the turn of recent events in Afghanistan.

“80,000 Pakistanis died. US 150 billion dollars were lost to our economy. There were 3.5 million [temporarily] internally displaced Pakistanis,” he said.

Prime Minister Imran Khan said the United States went wrong when it tried to force a military solution in Afghanistan.

“And if today, the world needs to know why the Taliban are back in power, all it has to do is to do a deep analysis of why a 300,000 strong well equipped Afghan army – gave up without a fight … and it is not because of Pakistan.”

The United States had requested member states to send pre-recorded messages as a preventive measure against the spread of coronavirus.

SAPM on Health announces vaccination for youth in phases