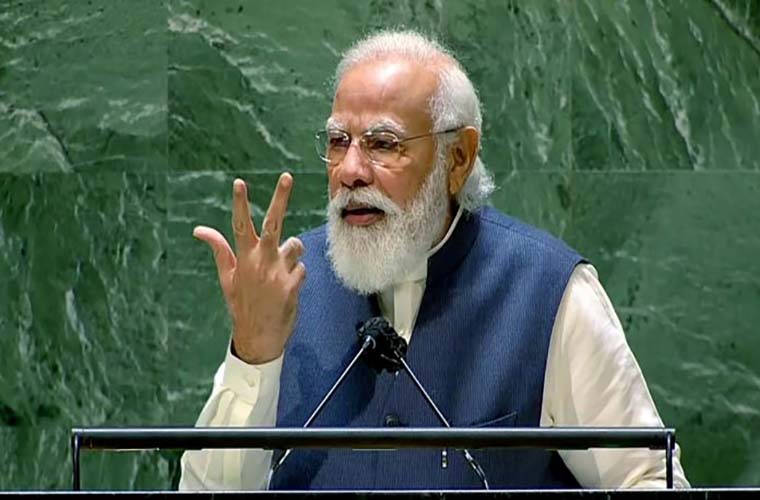 In his address to the U.N. General Assembly on Saturday, Indian Prime Minister Narendra Modiexpressed concern over the situation in Afghanistan.

He underscored it essential to ensure that the war-torn country’s territory not used for terrorist activities.

Modi’s remarks came a day after a Pakistani diplomat told the 193-member Assembly that India funds and supports terrorist organizations like the TTP which conducts numerous cross-border terrorist attacks inside Pakistan.

She said India was also resorted to “state terrorism” to suppress the people of Illegally Indian Occupied in Jammu and Kashmir (IIOJK).

Meanwhile, hundreds of Kashmiris and Pakistanis staged a demonstration outside the UN building.

They denounced Indian atrocities in Kashmir and calling on the world body to take urgent steps to grant the right of self-determination to the Kashmiri people.

In his remarks to the Assembly, Prime Minister Modi also said the danger of “regressive thinking and extremism” was rising in the world.

“Those who use terrorism as a political tool have to understand that terrorism is an equally big threat for them,” Modi said.

“We also need to be alert and ensure that no country tries to take advantage of the delicate situation there, and use it as a tool for its own selfish interests,” he said, without naming any country.

“At this time, the Indian prime minister said, the women and children of Afghanistan as well as the minorities of Afghanistan, need help. “And we must fulfil our duty by providing them with this help.”

In his strong speech to the General Assembly on Friday, Prime Minister Imran Khan exposed India’s oppression in Kashmir.

He also pointed to the growing Hindu extremism in India that has become a threat for its Muslim population and those belonging to other religious minorities.

Moreover, he also made a pitch for the world to rally behind Afghanistan’s newly formed Taliban government for preserving the progress made by the country over the past two decades and preventing it from turning into a safe haven for terrorists.

“There is only one way to go. We must strengthen and stabilize the current government, for the sake of the people of Afghanistan.”