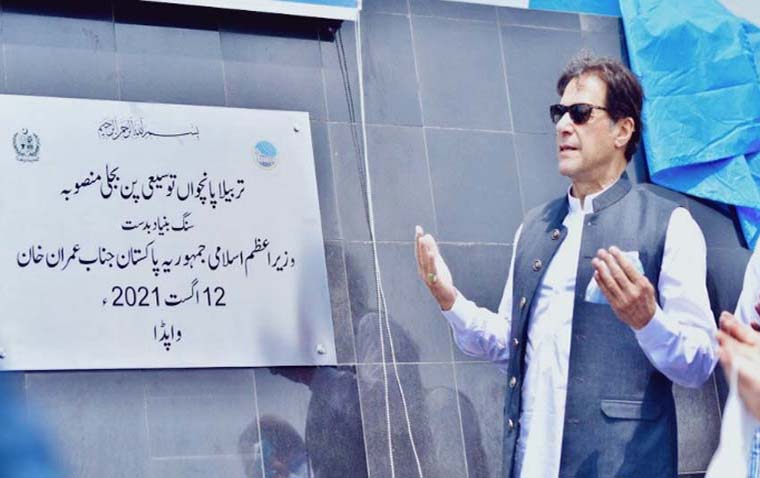 He said the government has planned to construct ten new dams in ten years to generate clean energy and address water scarcity issue.

Furthermore, he said the tunnel will increase the life of the dam besides producing clean energy.

He said the government has been making efforts to significantly enhance the share of clean energy by 2030.

He said global warming is causing many problems, including flooding.

The dams will protect the country from the effects of global warming.

Imran Khan said if we preserve the water of glaciers, we can provide water to our farmers throughout the year.

He said Mohmand Dam and Bhasha dams will be completed in 2025 and 2028 respectively that will help protect the future generations. He said these dams will also contribute to long life of Tarbela Dam.

The Prime Minister said a decision to construct Bhasha Dam made in 1984.

But, it could not be materialized, and the country had to suffer.

He said the previous governments signed contracts for costly power production, which added burden to people.

The World Bank and the Asian Infrastructure Investment Bank are providing 390 million dollars and 300 million dollars, respectively, for Tarbela 5th Extension Hydropower Project to be completed by 2024.

Meanwhile, the Prime Minister on this occasion also had a detailed briefing on the project.

He said that T-5 Hydropower Project will enhance the life of Tarbela Dam by addressing the issue of sedimentation and ensuring sustainable irrigation releases.

He apprised the PM that the project will generate another 1530 MW of low cost and environmental friendly electricity.

With completion of T-5, installed capacity of Tarbela Dam will increase from 4888 MW to 6418 MW.

The Prime Minister was told that T-5 will provide 1.347 billion units of low-cost and green energy to the national grid on the average every year.

Moreover, the project will also generate around 3000 employment opportunities during the construction phase.

Meanwhile, the Prime Minister on this occasion also planted a sapling of pine tree.

Pakistan observes International Day for the Elimination of Violence against Women