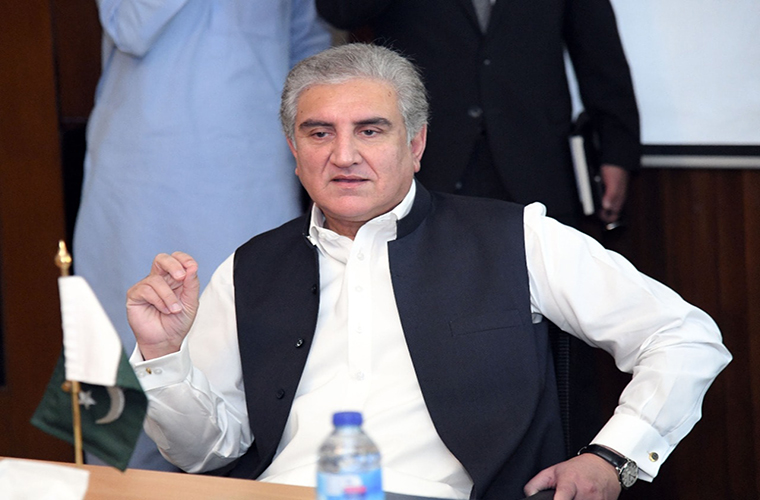 Foreign Minister Shah Mahmood Qureshi Thursday revealed that the nexus of NDS and RAW was behind the terrorist attack took place on July 14 in Dassu and that Afghanistan’s soil was used for the purpose.

The FM told the media in a news briefing in Islamabad today.

He further said that as per our investigation, Afghanistan’s soil was used for this incident. We are clearly looking the traces of its planning and executing meeting with the nexus of NDS and RAW.

What do they want? Why did the nexus perpetrated it? We think, elements which cannot digest Chinese investment in Pakistan as well as growing economic cooperation (as causes).

The foreign minister said that the investigation made it clear that the vehicle used in the attack smuggled from Afghanistan.

He said the security agencies reached this finding based on the CCTV footages of 36 cameras installed along the 1400 kilometer stretch of the road.

Moreover, the evidences including a thumb, a finger and other body parts of the bomber were also examined besides analyzing the mobiles data and questioning of over 1000 workers of project.

He said the investigation teams had identified and tracked the movement of the vehicle used in the attack and had also been able reach out to the handlers.

The foreign minister told the media that the terrorists’ first (planned to) target Diamer Bhasha Dam but could not succeed. So, opted to target the Dassu Dam project.

He confidently said that the elements behind the terrorist attack would not succeed to achieve their designs.

Because both China and Pakistan decided to face such cowardly attempts.

The FM further said the matter also discussed during his visit to China.

The Chinese side looked satisfied over the probe.

He said Pakistan had shared the details of the probe with China. Both the sides resolved that such incidents could not undermine their resolve rather they would emerge stronger.

Moreover, Qureshi resolved that the probe will be taken to the point of exposing the perpetrators as well as taking them to task.

Strengthened security around the development projects

He told media that the government had strengthened the security around the development projects with a resolve that the all CPEC projects would continue and also completed timely.

Moreover, he resolved that the Pakistan and China All Weather Strategic Partnership would not fall prey to any such planning rather continue to strengthening and expanding the ties and cooperation.

He further said that the investigation was being carried out by the Pakistani agencies and the government was keeping the Chinese side updated on the subject.

He said both Pakistan and Afghanistan had an understanding of not allowing the use of their soils against each other, so hoped that the country would cooperate with Pakistan in probe of the Dassu incident.

Furthermore, he said the material support for the attack came from the said NDS-RAW nexus.

The FM hoped that the world community would take notice of it.

He said Pakistan would take up the issue at every platform as it involved the killing of innocent people.

Qureshi said China had played a responsible role as both the countries trusted each other.

The foreign minister said the spoilers of Afghan peace process were poised to target Pakistan but due to Pakistan’s effective diplomatic engagement, their propaganda was not being well received.

He told media about arrest of the members of the network behind the attack had been arrested.

He said that Hussain in Swat first purchased that smuggled vehicle used in the incident.

That man later handed it over to the execution party on July 7, 2021.

The DIG CTD KP further said Tariq, another facilitator took the vehicle to the site. That person also came from Afghanistan.

However, three main characters including Tariq were in Afghanistan.

He further said as per the investigation and examination, Khalid alias Sheikh carried out the bombing.

The DIG made clear Khalid too not a registered Pakistani citizen.