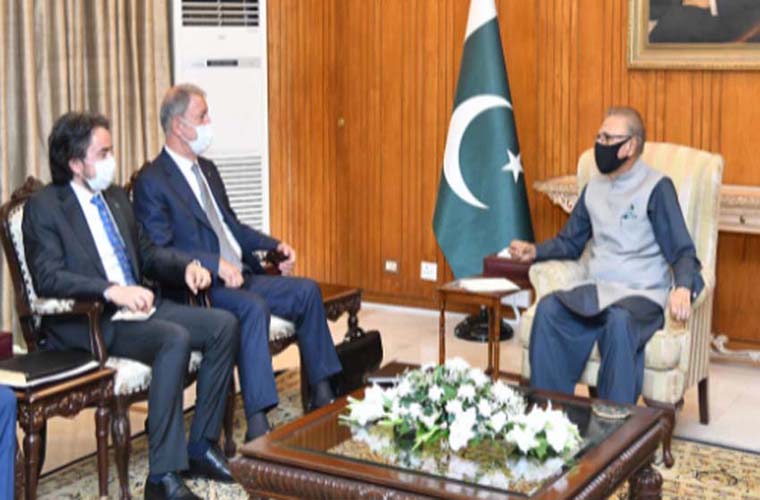 President Dr. Arif Alvi emphasized on unity in Muslim Ummah to deal with the big challenges like Islamophobia.

While talking to Turkish Defence Minister Hulusi Akar, he further said the Islamic world has been facing different issues and a complicated situation.

The President said Pakistan and Turkey have identical views on international issues.

He said that both the countries also support each other at world forums.

He said Pakistan has been playing a sincere role for peace and stability in Afghanistan.

The President said Pakistan has been affected by the long war in Afghanistan.

He also thanked Turkey for supporting Pakistan on Kashmir and FATF issues.

He said the two countries need to enhance cooperation in defence sector, including military training.

Moreover, he also emphasized on joint efforts on matters of bilateral interest.

He said Turkey will continue supporting Pakistan on Kashmir issue.

While talking to him, the PM said Pakistan and Turkey enjoy historic fraternal ties marked by unique mutual trust and mutual support.

The Prime Minister expressed deep concerns over the forest fires in Turkey.

Furthermore, he reaffirmed Pakistan’s solidarity and readiness to extend all possible assistance to help cope with this calamity.

The Prime Minister expressed satisfaction at the existing level of bilateral defense cooperation.