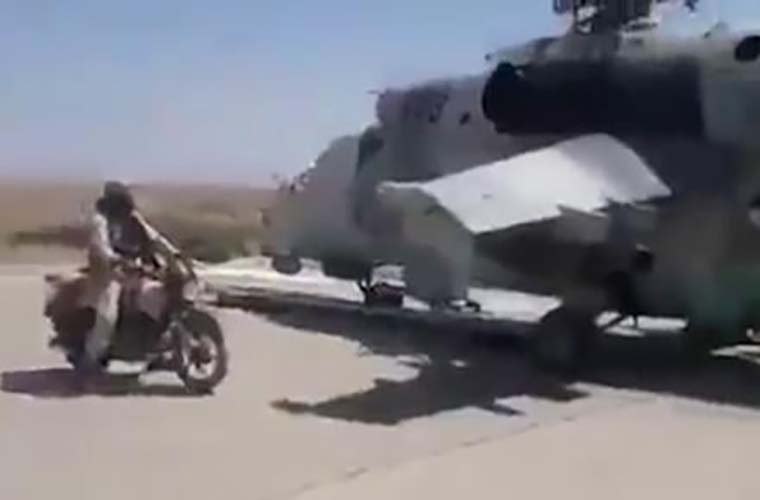 Following the withdrawal of Afghan security forces from the centers of Farah, Badakhshan and Baghlan provinces, the Taliban on Wednesday captured Kunduz airport.

That airport area also serves as the center of the 217 Pamir Army Corps.

According to Tolo News, this is the first time that the Taliban has taken over an army corps.

Footage shared on social media shows dozens of security force members in Kunduz surrendering to the Taliban. The Taliban also appropriated a military helicopter in Kunduz, but the helicopter was out of service.

Sources said that after the evacuation of Faizabad, the center of Badakhshan province in the north, security forces attempted to reach Farkhar district in Takhar but they came under Taliban attack and sustained casualties.

Following the fall of 9 provincial centers to the Taliban, the Afghan government has made some changes within the leadership of security forces.

Officials said that the the commander of 215 Maiwand Corps, Gen. Sami Sadat, has been appointed as commander of the Special Operations Corps. He replaced Gen. Hibatullah Alizai.

However, Gen. Hibatullah Alizai, the commander of the Special Operations Corps, has been appointed the chief of army staff, replacing Gen. Wali Ahmadzai.

Referring to the latest events in Kunduz, MP Shah Khan Sherzad said: “The airport and army corps fell to the Taliban with all their equipment.”

“There is a state of chaos and anarchy in Badakhshan, the people are very frightened, government vehicles were looted and transferred to unknown locations, public assets have been looted. Fayzabad prison was broken into and some inmates were killed,” said Atiqullah Zabih, MP.

Officials said that the security forces are now deployed at Farah airport.

Moreover, footage shows Taliban commanders appearing among the people in Fayzabad, Pul-e-Khumri and Farah city and announcing that the group will impose Sharia law.

Local journalists in Takhar said that the Taliban has ordered the media to act based on Sharia law.

“If the Baghlan situation is not addressed, then north will be finished, there is need to take action about the north,” said Azim Mohseni, MP.

Reports indicate that security forces evacuated Pul-e-Khumri city on Tuesday night without putting up any resistance.

This week the security forces evacuated the provincial centers of Takhar, Jawzjan, Sar-e-Pul and Samangan.

Over 95720 Kashmiris martyred due to Indian state terrorism in IOJK