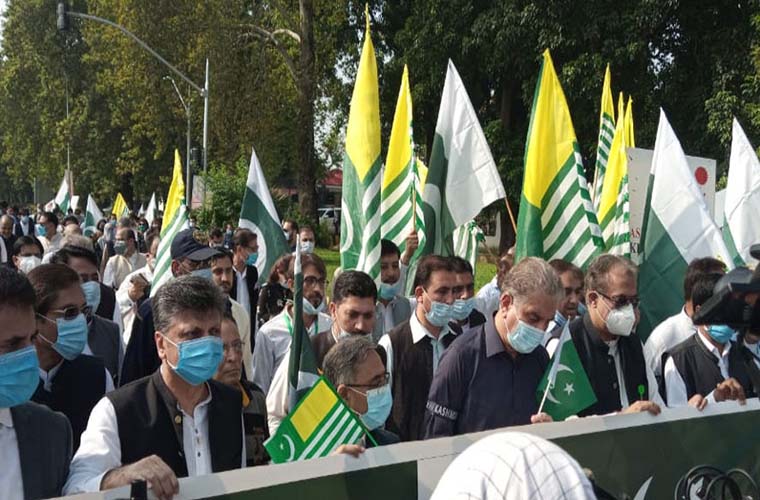 Foreign Minister Shah Mahmood Qureshi led the rally in Islamabad at the foreign office. It aimed to express solidarity with the oppressed Kashmiri people.

The participants were carrying flags of Pakistan and Azad Jammu and Kashmir. They were raising slogans in support of Kashmiri people.

He said the entire Pakistani nation and Kashmiri people reject the illegal and unilateral steps of 5th August 2019. Indian government took that step in illegally occupied Jammu and Kashmir.

He further said we will continue to support the just cause of Kashmiri people.

The rally culminated at D-chowk.

Meanwhile, Prime Minister Imran Khan has said Pakistan will continue to fight the Kashmiris’ case with conviction till they are allowed to decide their future according to the UN Security Council resolutions.

He stated this in a series of tweets on Thursday.

Pakistan slammed India on the occasion of completion of two years of India’s illegal and unilateral steps in the Indian Illegally Occupied Jammu and Kashmir (IIOJ&K),.

The Prime Minister expressed confidence that the Kashmiris’ struggle will succeed.

He said despite these brazen violations of all international laws, repeated human rights violations, well documented by world media and human rights organizations and in the face of an unprecedented  ruthless military siege, the Kashmiri people remain undaunted in their struggle for self-determination.

Furthermore, he saluted the sacrifices of Kashmiri brothers and sisters in their determined and legitimate struggle for their inalienable rights.

Imran Khan said the Indian government’s barbarism in IIOJK is inspired by its RSS Hindutva ideology.

The PM further said India today is destroying regional stability through its rogue actions and state sponsored terrorism in contravention of all international laws and norms.