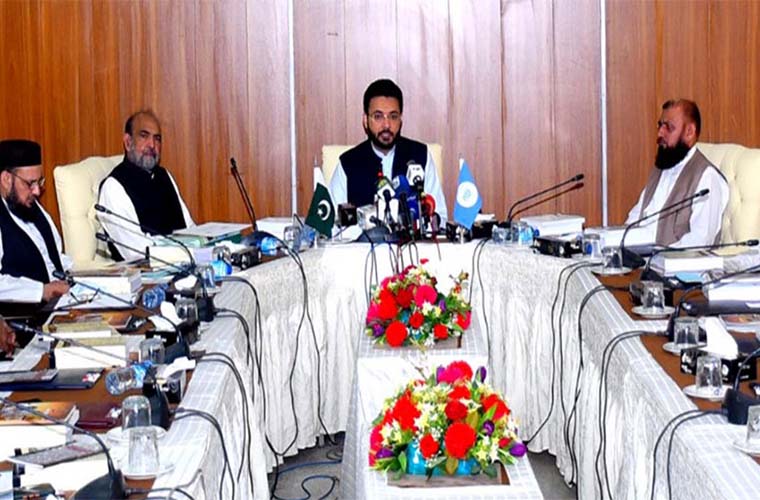 Ulema have an added responsibility to counter Indian hybrid war against Pakistan, says Minister of State for Information and Broadcasting Farrukh Habib.

He made this appeal, while addressing an Ulema Convention in Islamabad on Tuesday.

He asked the religious scholars belonging to different schools of thought to continue to play their role for unity and harmony in the society to foil the conspiracies of the enemy.

Ulema have an added responsibility to counter Indian hybrid war

Furthermore, he warned that the enemy always tries to exploit our fault lines to stoke anarchy.

He urged the Ulema to play role to counter the hybrid warfare launched by India against Pakistan.

He said we have to take forward Paigham-e-Pakistan code of conduct bearing signatures of about eighteen religious scholars for peace and stability in the country.

Moreover, he said EU DisinfoLab recently exposed as to how India was involved in propaganda campaign and spreading fake news against Pakistan through social media.

He said that our enemy is also trying to create hurdles in the way of multi-billion China Pakistan Economic Corridor project (CPEC).

He said the enemy does not want development taking place in Pakistan. However, he said Pakistan and China enjoy all weather friendship and both the countries have stood by each other in difficult times.

Pakistan continues to play a positive role for peace

Farrukh pointed out that Pakistan continues to play a positive role for peace and stability in neighboring Afghanistan.

He said Pakistan has made it clear that it will no longer be part of any conflict but partner in peace.

Farrukh Habib expressed satisfaction over the economic strides being made by the country.

He said despite COVID-19 the country registered economic growth of four percent during the last fiscal year.

He underlined sectarian harmony is need of the hour. He further said Pakistan has rendered immense sacrifices in the war on terror and it stands firm against terrorism.