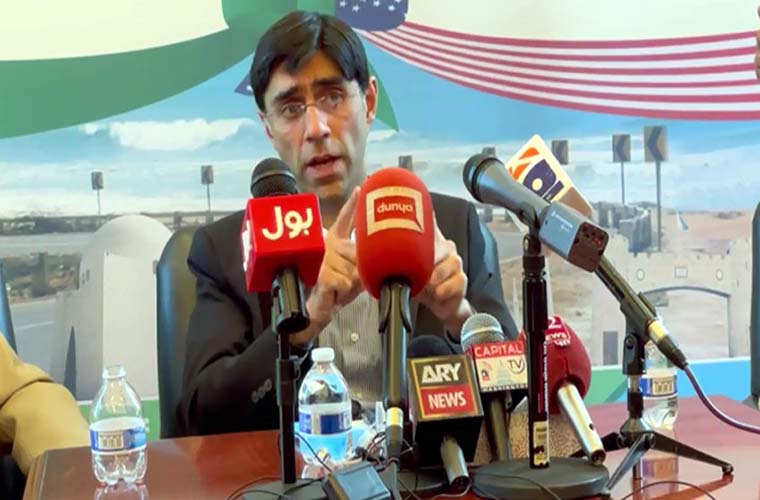 He stated this, while interacting with Pakistani media in Washington.

He said Pakistan and the United Sates have agreed to continue with the Afghan peace process to ensure lasting stability in Afghanistan.

He underlined need to work jointly to avert any security vacuum in Afghanistan.

Dr Moeed further said any instability in Afghanistan will lead to rebirth of various terrorist groups there, which can create problems for the world and Pakistan.

He said we have repeatedly said that Afghan soil is being used against Pakistan, which needs to be stopped.

He said Tehrik-e-Taliban Pakistan has established sanctuaries in Afghanistan that he called a threat to Pakistan.

Besides, there may be some groups which can target other countries as well, which is a matter of concern for the United States too.

Regarding his engagements with US officials, Dr Moeed Yusuf said both Pakistan and the United Sates are unanimous that there should be peace in Afghanistan and we are discussing technicalities to achieve this objective.

He further said Pakistan has played its due role and will continue to do so for peace in Afghanistan. He said that the United Sates is an important player and will remain relevant for stability in Afghanistan.

Answering a question, Moeed Yusuf said we will react if any country attempts to use Afghan soil to destabilize Pakistan like any sovereign country.

Furthermore, he said use of Afghan soil to undermine Pakistan is not acceptable.

Dr Moeed  said it is a well-known fact that who is involved in carrying out subversive acts against Pakistan from Afghanistan.

He urged all the stakeholders to make their sincere efforts to avert any protracted conflict or civil war in Afghanistan. He said any decision should be taken in view of the ground realities.

Moeed said the region is agreed that there should be a joint decision and there is also a general consensus that any military takeover in Afghanistan is unacceptable. He said military takeover is against the democratic norms and human rights and no country, especially Pakistan, can afford a civil war at its doorsteps.

Answering a question, Dr Moeed Yusuf said under the current arrangements, Afghanistan’s exports through Pakistan are continuing without any bar.

He said Indian goods bound for Afghanistan are also being allowed through Karachi Port. However, transit of goods from India to Afghanistan via land route through Pakistan is not allowed due to security concerns.

He said Pakistan has the right under the International Law to stop movement of goods through its territory if it feels any threat to its national security as it is a known fact that India does not let any chance go to create instability in Pakistan.

Dr Moeed Yusuf said, despite all this, Pakistan, especially Prime Minister Imran Khan, has tried its best to improve bilateral relations with India and both the countries can live like a civilized neighbours. But, unfortunately, India, at present, is being ruled by an ideologically motivated government that actively pursues Hindutva ideology.

To another question, Dr Moeed Yusuf said Islamabad desires peace in Afghanistan as it is not only in the best interest of Pakistan, but it also serves the interests of other countries. He said Pakistan wants sustainability in Afghanistan’s economy and will welcome any country to invest in the economic development of Afghanistan.

Regarding repatriation of Afghan refugees living in Pakistan, the SAPM said we want dignified return of these refugees to their homeland. He said no country has extended generous hospitality toward Afghan refugees more than Pakistan.

Pakistan eyes exports to Central Asia and Europe through Uzbekistan