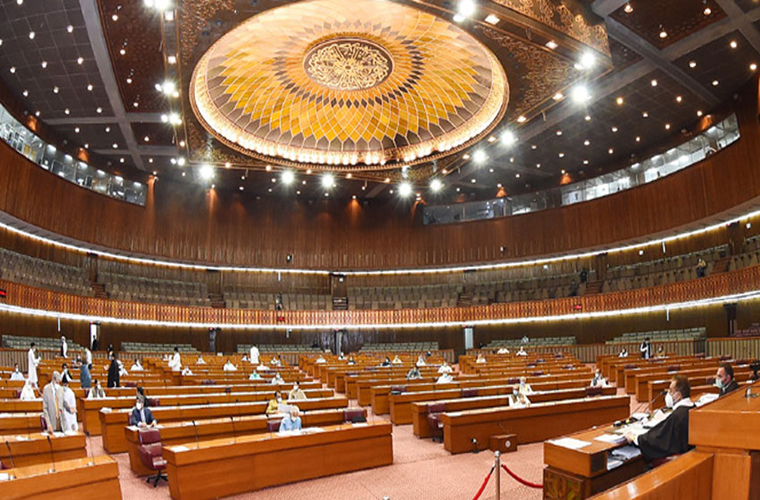 He expressed these views, while participating in the budget debate in the National Assembly on Thursday.

He further said the economic indicators are improving with agriculture, industries and services sectors witnessing growth.

The Minister of State said Ehsaas program is aimed at realizing the vision of transforming Pakistan into a welfare state. He said the health card initiative is helping the underprivileged segments of the society to get free of cost medical treatment.

Ali Muhammad Khan said the present government has also started construction work on major dams such as Diamer Basha, Dasu and Mohmand which will help irrigate our land.

The Minister of State said Prime Minister Imran Khan has set an example of across the board accountability under which those belonging to the ruling party are also facing cases.

He said both the government and the opposition parties should work together to establish an Islamic economic system. He said we have to free the country of interest based system in order to take the country forward.

Marriyum Aurangzeb of the PMLN also spoke on the budget. She said the government has failed to fulfill the promises made for construction of five million houses and provision of ten million jobs to the youth.

Dr Seemi Bukhari underscored the budget as pro people. She noted increase in the minimum wages to Rs 20 thousand whilst the salaries of employees raised by 10 percent.

She said the world institutions are also now recognizing the economic performance of the country.

Furthermore, she lauded Prime Minister Imran Khan as the pride of Pakistan who thinks for the next generations and not the next elections.

Rana Tanveer Hussain said Pakistan is faced with many challenges and unity is the need of the hour to overcome them. He said the government should focus on public welfare projects.

Ahmad Hussain Deharr said the government has given a comprehensive plan to lift the people out of poverty. He said the budget has given a ray of hope to the poor people.

Pir Syed Fazal Ali Shah Jilani said steps should be taken to bring the prices of essential commodities such as flour and sugar within the reach of common man.

He said salaries of employees should be enhanced by twenty five to thirty percent.

Shandana Gulzar underlined Ehsaas as an excellent program for economic empowerment of women. She said we need to take special steps to save the children from abuse.

Mian Riaz Hussain Pirzada said the budget envisages no measures for development of the agriculture sector.

Faiz Ullah said it is a special blessing of God Almighty and the visionary approach of Prime Minister Imran Khan that the country’s economy remained safe from the impact of Covid-19 pandemic. He called for reforms in the civic service.

Participating in the debate, Minister for Inter Provincial Coordination Fehmida Mirza said the budget envisages a program to uplift the weakest segments of the society.

She said 15 million families were provided with immediate assistance under Ehsaas cash emergency program after the breakout of Covid-19 last year.

She said incentives were also given to different sectors including the industries and construction to give impetus to the economy in difficult situation.

However, she regretted that the opposition held big public gatherings when the pandemic was on the rise.

She said the government has announced packages for less developed areas.

In this regard, the minister referred to Gilgit Baltistan, tribal districts, Sindh and Balochistan.

Opposition asked to give proposals

She said instead of criticism for the sake of criticism, the opposition parties should hold meaningful discussion on the budget and give their inputs.

Meanwhile, Mir Amir Ali Khan Magsi opposed the use of electronic voting machines in the elections.

Furthermore, he said Sindh province should not be neglected in development.

Malik Umar Aslam Khan said the PTI government has transformed the FBR into an efficient institution. He said this budget will play an important role in the development of the country.

Riaz ul Haq said the prices of essential commodities have gone beyond the reach of common man.

He further said the government should take steps to provide relief to the people.