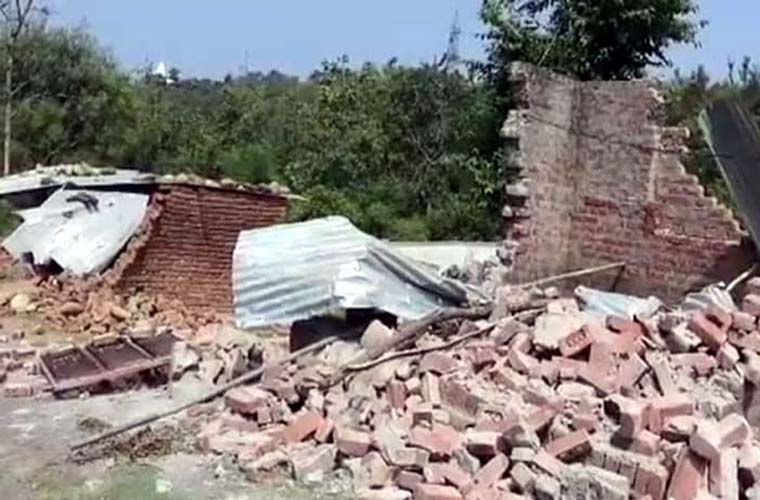 Large number of Kashmiris rendered homeless due to demolition of houses in the Indian Illegally Occupied Jammu and Kashmir (IIOJK).

Analysts lamented the longest and devastating demolition of houses which Indian occupation forces carried out in recent times.

The military operation ensued a gun battle in the Rawalpora village of IIOJK’s Shopian district resulted in the killing of two local Kashmiri fighters.

One of the six houses razed down belonged to the slain local Sajjad Afghani’s family. The operation continued for over 70 hours. Smoke continued to emanate from the site for days, locals said, as hundreds of people kept visiting the village, surrounded by lush green apple orchards, after the operation, Anadolu Agency reported on Tuesday.

According to a report posted on Agency’s website, the Geneva Convention of 1949, to which India was a signatory, discouraged the use of disproportionate force in armed conflicts.

“Experts believe the use of disproportionate force in the Kashmir region during military operations is costing too much to the local population,” it added.

Sheikh Showkat Hussain, a political analyst in the region, said under the international law, use a disproportionate force in any armed conflict was forbidden.

As per data accessed by the Anadolu Agency, at least 114 residential houses destroyed in the military operations last year.

Meanwhile, International Committee of the Red Cross noted not only collective criminal punishment but harassment against a particular group.

Moreover, one of the affected family members said they possess nothing now because their shelters razed to the ground.

The destruction occurred within a blink of an eye for which they took years to build.

Indian forces caused them huge losses emotionally, physically and mentally. Even their source of income lost.

The locals feared further reprisal from the authorities. Some of them had to remain in custody for a fortnight in connection with the same encounter.

Bashir Ahmad (name changed) said that post-encounter they were living in a single room of an old house of a neighbour, and so was another family.

According to a female member of one of the families, not a single household item retrieved during the fake encounter,.

They said the education of their children had also been badly affected due to the displacement.

Furthermore, another member of an affected family also shared views.

“It is very hard to live in a single room where all of us have to sleep, dine and cook.”  That the new accommodation they were putting up in did not have a washroom, forcing them to attend nature’s call in the open.

These homeless families further said they had no means to build new houses due to the lack of resources.

“We could have rebuilt our houses, but our bank accounts were frozen by the authorities after being shared by people on social media,” another family member said.

China is, was and will stay Pakistan’s reliable ally: FM Shah Mahmood