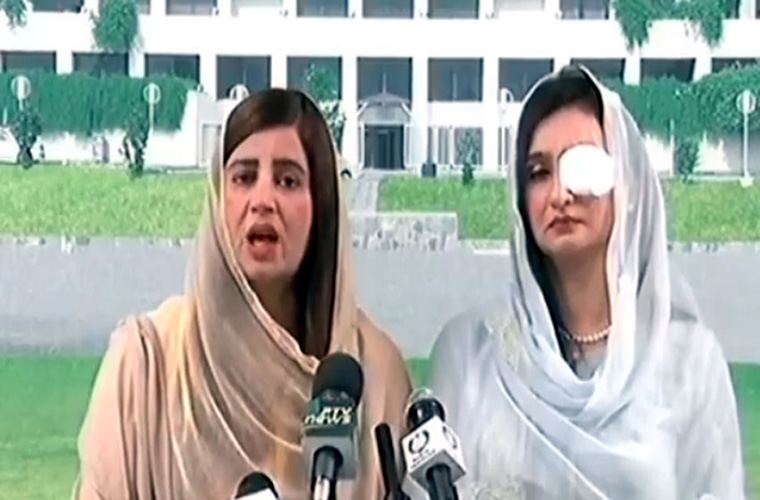 PTI leader Zartaj Gul demanded suspension of the National Assembly membership of those PML (N) leaders for one year who attacked the women members of the PTI yesterday.

She made this demand, while talking to media persons. Other women parliamentarians, including Malika Bukhari accompanied her.

Moreover, she suggested the PML (N) leaders should also apologize over their act.

Zartaj Gul said the PML (N) is no longer a political party.

She said no woman is safe from the hooliganism, abusive language and character assassination of the opposition party.

Malika Bukhari whose eye got injured in yesterday incident, in her remarks, said the PML (N) has a record of attacking institutions including the Supreme Court.

She further lamented yesterday’s incident as a black day in the parliamentary history of Pakistan.

Malika said that the PML (N) crossed all the limits. She said the PML (N) should demonstrate patience in its conduct.

In her remarks, Munaza Hassan also condemned the PML (N) members for attacking and insulting the female lawmakers.

Meanwhile, Minister of State for Information and Broadcasting Farrukh Habib also expressed views, while talking to media persons outside the ECP in Islamabad on Wednesday.

He lamented the attitude of the opposition parties during the session of National Assembly yesterday.

Furthermore, he said Malika Bukhari’s left eye cornea got injured due to the attack of the opposition.

He questioned what kind of attitude the opposition is fostering in the house.

Farrukh further said the PML (N) has a history of attacking the institutions in the past including the Supreme Court and the National Accountability Bureau.