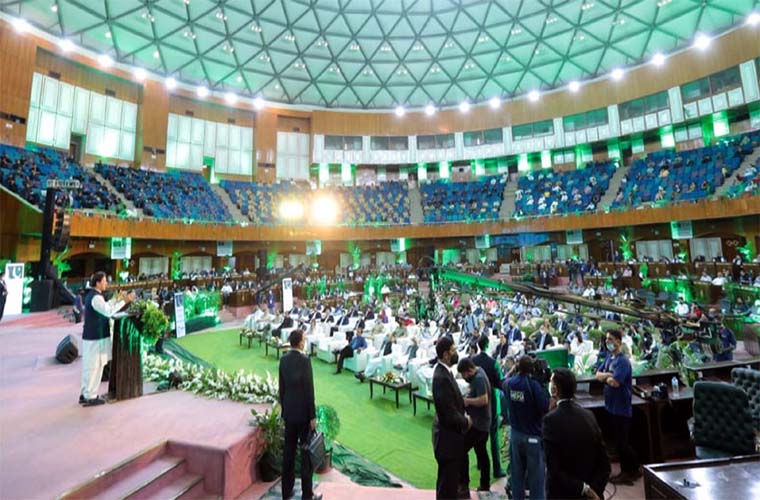 Rich countries urged to provide funds to developing countries like Pakistan to fight global warming and improve the ecosystem.

He commended the UN for repeatedly asking the developed world to fulfill its responsibility.

The UN asked them to support those countries which are working for the protection of environment.

Imran Khan noted the United Nations Decade on Ecosystem Restoration as an opportunity for the world to do the course correction.

Besides, he noted it an opportunity to work towards meeting the carbon emission cut targets.

The PM pointed out that Pakistan’s carbon emission share is miniscule. Yet, it decided to take initiatives to offset the impact of global warming.

Imran Khan said one billion trees were planted in Khyber Pakhtunkhwa in a period of five years from 2013 to 2018.

He further said another one billion trees have also been planted in different parts of the country under Ten Billion Tree Tsunami project.

The PM urged the nation to become part of the mega forestation program to make it a success story which will have positive impact not only on the lives of the people but also the country and its economy.

He said greater responsibility rests with the teachers to educate the children about the importance of plantation.

Moreover, he said local communities will be involved for the protection of forests.

He said the back of timber mafia has been broken in Khyber Pakhtunkhwa with the help of forest guards which helped increase the forest cover in the province.

The Prime Minister said Recharge Pakistan is also being initiated with the purpose to restore wetlands and improve the water table.

He said fifteen national parks have been established which will also help promote tourism.

He said by 2030, we will be producing sixty percent energy from renewable sources while 30 per cent of all vehicles would be transferred to electricity as part of efforts to limit emissions.

Furthermore, the PM said it is a matter of distinction for Pakistan to host the World Environment Day. This, he said, is also acknowledgement of the steps taken by Pakistan for protection of environment.

Special Assistant to the Prime Minister on Climate Change

He said our environment protection initiatives have so far provided eighty five thousand jobs to the people.

This year, he said, there will be an addition of two hundred thousand more jobs.

Amin Aslam said Pakistan has also accepted the challenge of restoring one million hectares of degraded and deforested land. He said our green financing initiative is aimed at generating funds for climate friendly projects.

He commended the strides which Pakistan made to cope with climate change.

Xi Jinping said his country stands ready to work with Pakistan and other countries to inject new impetus into global environmental governance.

Moreover, he vowed to contribute to a clean and beautiful world.

He lauded him for undertaking a mega project of planting ten billion trees.

Furthermore, Boris Johnson hailed it a huge campaign for forestation.

Meanwhile, UN Secretary General António Guterres said these next ten years are our final chance to avert a climate catastrophe, turn back the deadly tide of pollution and end species loss.

He said we should finally make peace with nature and secure a better future for all.