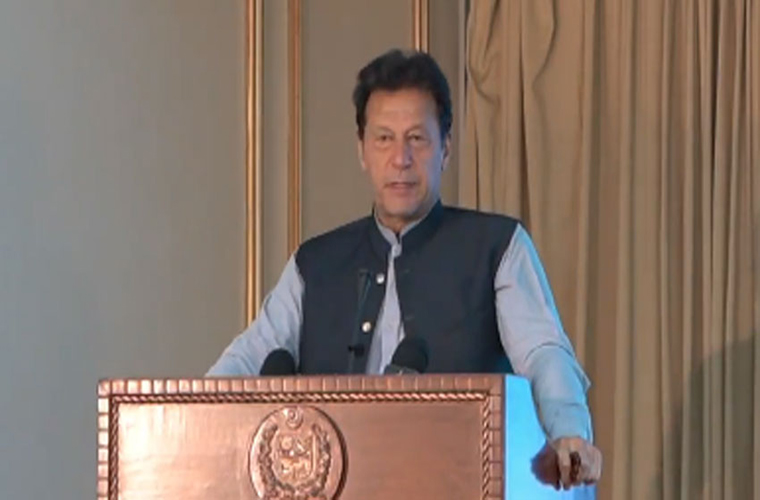 First Green Eurobond of Pakistan formally launched at a ceremony in Islamabad on Monday.

The Water and Power Development Authority issued it to raise 500 million dollars for financing of Diamer Bhasha and Mohmand dams.

The PM said, while addressing the launching ceremony.

He acknowledging the progress made in the construction process of Diamer-Bhasha and Mohmand dams during two and a half years.

He further said these two water reservoirs will produce 10,000 megawatts of clean and environment- friendly electricity in the country.

The PM noted Pakistan as one of the most affected countries due tov climate change and global warming in the world.

To address this challenge, the government is effectively working on tree plantation drive under ten billion tree tsunami program.

Imran Khan said this program will considerably improve living standards of people. Besides, it will promote tourism and reducing pollution.

Furthermore, he claimed to have successfully achieved plantation target of one billion trees.

He said 15 special national parks are being established to protect and preserve the natural environment.

He said the government is working on a long-term planning to save the next generations as such policies are imperative for development of the country.

The PM also referred to the public welfare programmes initiated by the government.

He further said unified curriculum is being introduced to ensure quality education across the country.

Moreover, he said 100 percent population of Khyber Pakhtunkhwa has been provided health coverage while Punjab will be covered this year.

He said that Green bond has been becoming popular globally as countries re-orient their policies to join the raise to zero omission.

He said the success of this transaction is a reflection of the confidence of the international community in the policies of Prime Minister Imran Khan.

He underlined the Diamer Bhasha and Mohmand Dams projects critical to the country’s future energy, water and food security needs.

NCOC reports 1828 new cases of Coronavirus across the country