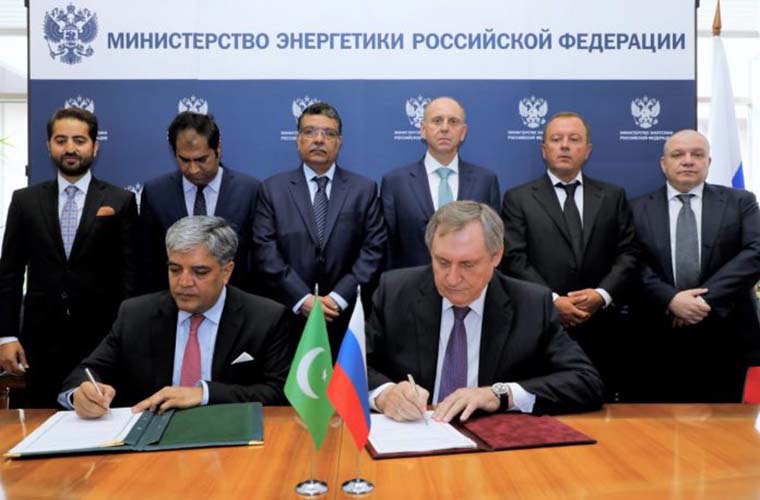 It aims at gas transportation from Karachi to Kasur.

In this regard, both the countries signed a protocol on the amendments.

Protocol signing on the Agreement on North-South Gas Pipeline Project held in Moscow.

According to the Pakistan Embassy in Russia, Pakistan’s Ambassador in Moscow Shafqat Ali Khan and the Russian Minister for Energy Nikolay Shulginov singed the protocol.

As per the protocol, they renamed the project as Pakistan Stream Gas Pipeline.

Moreover, they would set up Pakistan Stream Gas Pipeline (SPV) within 60 days of the agreement signing.

Notably, the pipeline will run from Karachi to Kasur for transportation of gas.

Both sides signed Pakistan Russia Inter Governmental Agreement (IGA) on North South Gas pipeline in 2015, but the Project delayed since then.

The pipeline project is a flagship strategic venture between Pakistan and Russia that would strengthen bilateral cooperation.

A strategic partnership with Russia

Meanwhile, Pakistan desires a strategic partnership with Russia and looks forward to enhanced bilateral relations in all fields of mutual interest.

This gas pipeline has a length of over 1.1 thousand km.

It will connect terminals for receiving liquefied gas (LNG) in the ports of Karachi and Gwadar.

That will link them with power plants and industrial consumers of gas in the Kasur district (Punjab) in the north of the country.

Meanwhile, the Russian Ministry of Energy issued a translated statement.

According to them, the relevant departments of the two countries had done a lot of work on the preparation of this Protocol.

Specially, its signing will allow our companies to begin practical implementation of the project in the very near future.

Thereby it helps the Pakistani side to strengthen its own energy security.

Moreover, it increases the use of natural gas as an environment friendly source of energy.