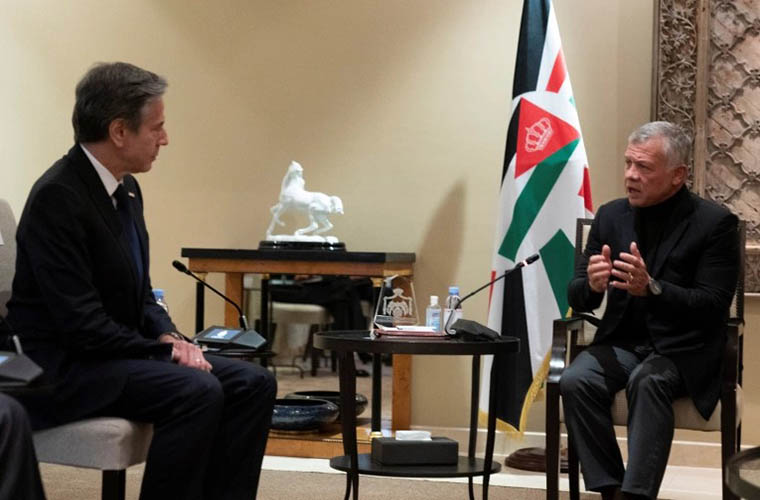 US secretary of state visits Egypt and Jordan after Israel visit.

Secretary of State Antony Blinken arrived in Jordan on the last leg of a regional tour.

The U.S. media reported the visit aimed to bolster a ceasefire reached last week between Israel and Hamas, the Palestinian faction that runs the besieged Gaza Strip.

US secretary of state visits Egypt and Jordan after Israel visit

Eleven days of Israeli bombardment that began on May 10 killed at least 254 Palestinians, including 66 children.

Israeli bombardment also wounded more than 1,900 others in the coastal enclave, according to health authorities.

At least 12 people in Israel, including two children, lost lives due rockets from Hamas and other armed groups from Gaza during the same period.

Blinken’s visit to Amman, where he met King Abdullah II on Wednesday.

Earlier, he had visited Cairo, where he met Egyptian President Abdel Fattah el-Sisi.

Prior to that he visited Jerusalem and Ramallah, where he held separate meetings with Israeli Prime Minister Benjamin Netanyahu and Palestinian Authority (PA) President Mahmoud Abbas.

The top US diplomat pledged millions in aid to rebuilding efforts in Gaza that he said the US would “ensure” would not benefit Hamas.

United States of America does not have direct contact with Hamas and labels it a “terrorist organisation”.

According to Al Jazeera, Yahya Sinwar, the Hamas leader in Gaza, said the group welcomed Arab and international efforts to rebuild the enclave.

Sinwar further said that we have satisfactory sources of money for Hamas and Qassam.

He said that a major part of it from Iran and part in donations from Arab, Muslims and liberals of the world who remain  sympathetic to our people and their rights.