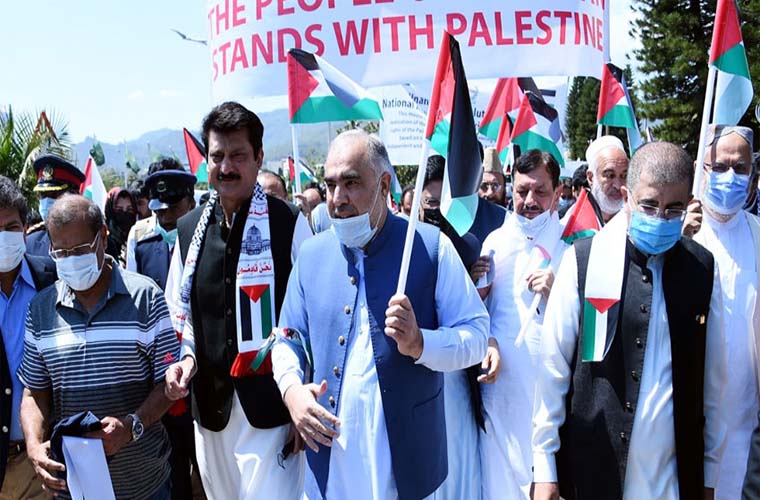 PTI held rally to express solidarity with the oppressed Palestinians.

Speaking on the occasion, Chairman Senate Sadiq Sanjrani said entire Pakistani nation stands by the Palestinian people in this hour of trial.

He further said the world community must play its role for the resolution of the lingering dispute.

He said the country’s political leadership is on the same page regarding this issue.

While addressing the event, Minister of State for Information and Broadcasting Farrukh Habib said the Muslim Ummah will have to collectively raise its voice against Israeli atrocities.

He condemned Israeli atrocities in Palestine and the Indian brutalities in Indian illegally occupied Jammu and Kashmir.

Furthermore, he said the country’s leadership has effectively pleaded the case of Palestinians at the world forums including the OIC and the UN General Assembly.

Farrukh Habib called for resolution of Palestine issue in accordance with UN resolutions.

He further said the Palestinian people should get their basic rights.

Moreover, he said the entire Pakistani nation stands by the oppressed Palestinian people.

On a call of Prime Minister Imran Khan, protest rallies held across the country.