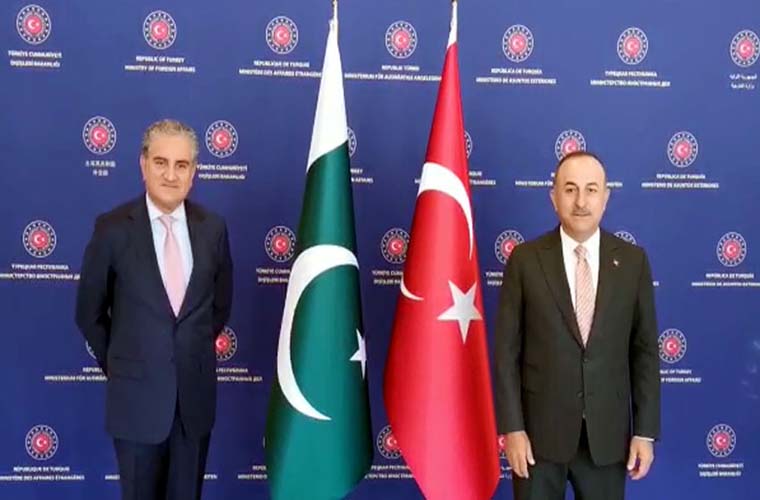 Pakistan Turkey condemn Israeli aggression against unarmed Palestinians and their forced eviction from their homes.

The two Foreign Ministers also decided to jointly raise voice against the Israeli persecution of Palestinians.

Shah Mahmood Qureshi said we will not leave alone our Palestinian brothers.

He said the entire Muslim community is in a state of pain due to the Israeli bombardment and the violence against Palestinians during Ramazan-ul-Mubarak and Eid-ul-Fitr.

The Minister said on the direction of Prime Minister Imran Khan, we are observing a day of solidarity with our Palestinian brothers on Friday.

He also lauded Pakistan’s continuous and robust support to the oppressed Palestinians.

Meanwhile, in a statement on Tuesday, Shah Mahmood said the Muslims residing in European countries must also play their role in this regard.

Foreign Minister Shah Mahmood Qureshi said that contacts are being established with different countries to get stopped the Israeli persecution of Palestinians.

He further said the bombardment in Palestine has resulted in power outage.

Besides, it also affected the supplies of essential commodities.

He said it will be lamentable if the international community remained silent on the Palestinian situation.

The FM said Israel is further complicating the matter and its bombardment is making it impossible for the Palestinians to access the healthcare facilities.

Moreover, Shah Mahmood Qureshi said hurdles are being created so that the Palestinian Foreign Minister could not attend the UN General Assembly session.

He said we will wait for the Palestinian Foreign Minister and want him to accompany us for the session.