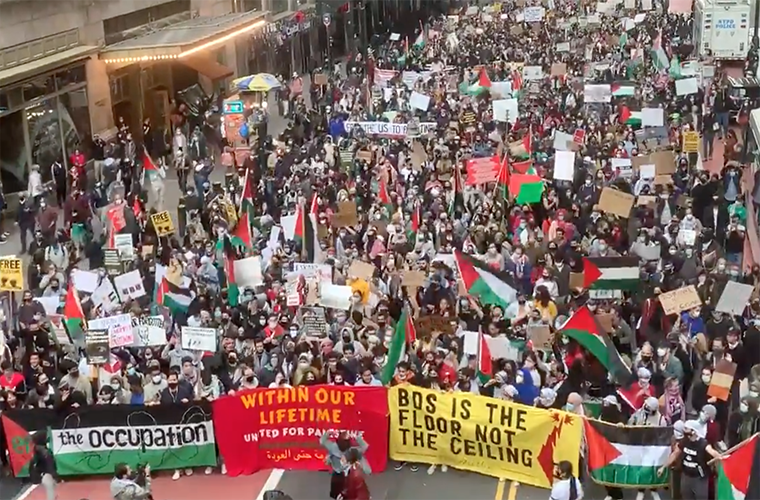 On the other hand, pro-Palestine protesters had blocked the 10 Downing Street in London, UK.

Thousands of pro-Palestinian New Yorkers packed the streets of Midtown Manhattan Tuesday at a protest against Israel, amid ongoing violence coming in and out of the Gaza Strip.

The protest, titled “rally to save Palestine,” commenced near the Israeli Consulate in New York.

Internal security there ordered staff home early to ensure their safety, a spokesman for the mission said.

After meeting outside the consulate, demonstrators marched toward Times Square.

They shut down 42nd Street as they chanted slogans such as “Defend Jerusalem,” “Gaza under attack,” “No more money for Israeli crimes,” “Free Palestine” and “End the occupation now.”

However, the massive police presence at the scene separated between the two sides as they shouted at each other.

One clip uploaded to YouTube showed a pro-Palestinian demonstrator seeking to rip an Israeli flag from one of the pro-Israel demonstrators who was behind a police barrier.

Officers immediately jumped on him and arrested him.

Moreover, another clip posted on social media showed police holding back several shouting pro-Palestinian protesters from a bloodied Jewish man who stood on the other side of a store window, holding up his Star of David necklace.

However, it remains unclear how the man suffered his injuries, nor who instigated the altercation.

Some cast doubt and see it a dubious video.